Securitisation analysts at National Australia Bank Ltd (ASX: NAB) predict a further fall in house prices in Sydney and Melbourne. The speculation by the analysts is based on the comparison of house prices with earnings of full-time workers.

The corporate finance staff of NAB performed an analysis on housing prices in Australia. It indicated that the countrywide house prices complied with the average multiples of full-time earnings. However, dwelling values in Sydney and Melbourne have to decline further to reach an average level.

According to the Director of National Australia Bank, Mr Ken Hanton, the bank expects a further fall in house prices as the price-earnings multiples in Sydney and Melbourne markets are still higher than bankâs bottom 25% quartile levels and the 10-year averages. He compared the situation with the post global financial crisis period when the price-earnings multiples fell outside the range.

Residential mortgage-backed securities (RMBS) market is an important source of finance for non-bank and regional creditors but, at times, banks keep a watch on the RMBS market. In this market, the pooled mortgages are packaged up by trusts and then issued as securities which can be purchased by investors.

RMBS funding costs have varied in the last ten years; however, the assets backing the bonds performed well due to low arrears.

While the Core Logic data revealed a significant fall in house prices over the last ten years, Australian RMBS investors have yet to witness a loss of capital. So, analysts at NAB feel no need to get worried. This is because the house prices in Sydney and Melbourne have to fall substantially to reach levels observed at the time of the global financial crisis when mortgage bonds held up.

According to NAB, the houses are valued at a multiple of 5.8x weekly full-time earnings (annualised) if observed on a nationwide basis. This figure is higher than the 20-year average of 5.5x but lower than the five and 10-year average measure.

As represented in the above table, Sydney properties have remained high-priced as its the median sale-price earnings multiple is slightly above the 10-year average but substantially higher than the bottom quartile value.

However, in Melbourne, the median sales price-earnings multiple is marginally above the 10-year average.

There is a close relationship between the dwelling prices and the earnings of workers as the rise or fall in income level can affect the workerâs ability to service a mortgage or pay a higher rent.

The below graph contains data of median house price to earnings ratios released by NAB. It can be observed that in 8 capital cities, the PE ratio rose from 6.7x in 2014 to 7.5x before stepping back to ten-year average levels. 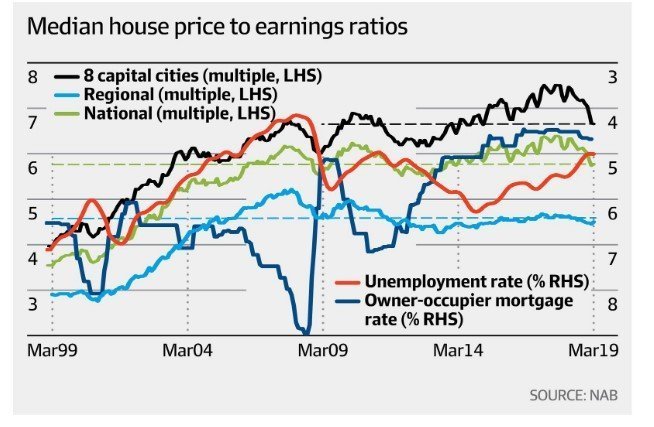