Eon has already completed the well pad construction and access road and has selected Capster Drilling as the contractor for drilling the well. Capstar intends to use the rig #312 for the drilling.

As per Managing Director John Whisle “the drilling of this first PRB well is the most significant milestone for the Company in the last few years”. (ASX Announcement: 11 September 2019).

In preparation of the drilling rig at the Govt Kaehne #9-29 well, the company has now installed the conductor pipe and cellar ring.

As per Eon’s recently released drilling update, the conductor rig drilled and installed 60 feet of steel pipe at the well location. After which the steel pipe was cemented into place. The conductor pipe at Govt Kaehne #9-29 well can be viewed in the below image. 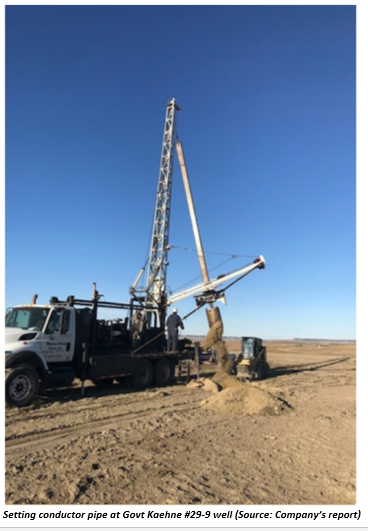 The setting of conductor is the first phase in spudding of a well. As per the announcement, the company has now completed the wellpad and has installed the pit liner, and within few days, the rig mobilization and spud date will be known.

In September 2018, the company acquired around 15,000 acres of leases in the PRB with a low 12.5% royalty interest and a lease holding fee of $2/acre for the first 5 years. For quite some time, the company is involved in the development of first PRB well Govt Kaehne #9-29, which has several merits, including:

Progress in the Development of PRB Leases

Capital Raising in March 2019 - In March 2019, the company raised a total of $2.54 million (before costs) via issue of new shares and options through a rights issue, with an intent to strengthen its balance sheet and to advance the permitting and drilling of the new well at the PRB project.

Commencement of Earthworks- In July 2019, after getting all the necessary state and federal approvals, the company started the Earthworks at the well location in order to build the well pad and access road for the Govt Kaehne #9-29 well.

Completion of Well pad - On 11 September 2019, Eon announced that it has completed the construction of the well pad and access road for the well, following which it has now installed the conductor pipe and cellar ring at the well. Eon is now waiting for Capstar to complete its existing work commitments with the drilling rig.

In order to place itself in a in a stronger position for future development opportunities, Eon is considering selling a portion of its interest in the Govt Kaehne well to industry partners, while retaining majority interest, as announced on 11 September 2019. This is expected to provide necessary capital for the completion of the well without changing the existing debt-equity structure.

Recently on 26 September 2019, the company disclosed the independent 1P reserves estimate for its projects (as at 30 June 2019), as per which, the gross and net reserves to Eon are 3,025 Mboe and 2,426 Mboe respectively.