On 21 July, Prime Minister Scott Morrison at a press conference in Canberra declared that the government would retain existing JobKeeper arrangements until September end before initiating JobKeeper 2 with phased cuts until 28 March 2021. The Federal government is due to announce an economic update on 23 July that will reflect the true depth of Australia's recession.

ATO statistics have shown that more than 960,000 organisations had been approved to date for JobKeeper compensation affecting nearly 3.5 million people.

According to a compilation of the results of the study, published by the Treasury, the JobKeeper analysis made various important observations, but one of the most significant one is the propensity of the system to generate "adverse opportunities", which pushed the need for JobKeeper 2 to be scaled down.

Here are 5 things about the new JobKeeper:

PM Morrison announced that JobKeeper subsidy, which is due to end in September would be cut from $1500 flat rate to $1200 a fortnight for full-time workers and to $750 for part-time workers from October. Also, from the beginning of January to March 2021 end, the payments would be reduced even further to $1000 and $650, respectively.

Although JobKeeper drew some critiques on offering many casual workers higher wages than before the pandemic, the PM stressed that a deliberate effort to provide a flat-rate contract was made to prevent "crushing" Centrelink system whilst acknowledging that many individuals have been working 2 or 3 jobs.

The one flat payment system across the entire labour force was to make sure the protection of the nation’s social security system, and to make a note of the amount of pressure the system had to bear.

In April, the new coronavirus supplement of $550 was introduced that doubled the level of benefits of unemployed people on JobKeeper, but it was supposed to expire in late September.

Mr Morrison revealed that to help cushion the blow from JobKeeper's gradual decline, the government would raise the income-free threshold, which is available to those on JobSeeker unemployment insurance to $300.

However, JobSeeker coronavirus supplement will be lowered to $250 for the last quarter of 2020. The move would permit those getting unemployment payments to earn up to this amount without affecting their benefits.

ALSO READ: The new JobKeeper might cause bankruptcies for businesses

Mutual obligations are planned to be reintroduced in 2 phases. People would be required to connect to employment services again and undertake 4 job searches a month from 4 August. Penalties regime would come into effect if a job is refused by people given through that process.

In the second phase that would be by September end, there would be a change towards a higher rate of job search and re-establishment of assets test for those payments.

Further, partner income test thresholds will stay in place as will the ordinary waiting period waiver. Mr Morrison stated that the government believes such supplements would "probably" need to continue after December, although that will be determined later in the year.

The new JobKeeper will cost $16 billion for an additional 6- month period, the total cost of the program amounting to $86 billion. On the other hand, unemployment payments under JobSeeker would be assessed in a few months, with a cut in coronavirus supplement from $550 to $250 given until December 2020.

This extension will cost $3.8 billion, bringing the total cost of the program to $16.8 billion. The government expects that there would be a need for coronavirus supplement to be extended after December as well.

Treasury's JobKeeper review report highlighted ~39% loss of income from other jobs, and JobKeeper was created to be given through only 1 employer so that a person does not receive it from all the employers if the person held multiple jobs.

About 30% of the pre-coronavirus private-sector staff was on JobKeeper, and Treasury's review found out that it had achieved its 3 main goals that were- saving jobs and businesses, keeping a formal link between employers and employees, and giving income support.

ABS data stated that about 44% of businesses on JobKeeper mentioned that the program influenced their decision to retain their staff.

Treasury anticipates that JobKeeper recipients will lessen, with about 1.4 million people remaining eligible in December quarter of this year, and 1 million in the March quarter of next year.

As per commsec’s latest update, overall spending increased 3% in Victoria, credit and debit card spending fell among key areas in the state, over the week to 17 July compared to the same week in 2019. The rise in spending is due to persistent government fiscal support and stimulus measures.

Commonwealth Bank of Australia (ASX:CBA) card data showed that card spending increased 11.4% than a year ago in the week ended 17 July, compared to a boost of 7.2% recorded for the week ended 10 July. Spending growth increased in all jurisdictions, but rising cases in NSW, as well as Victoria, could impact expenditure across the country.

The highlights demonstrate as following: 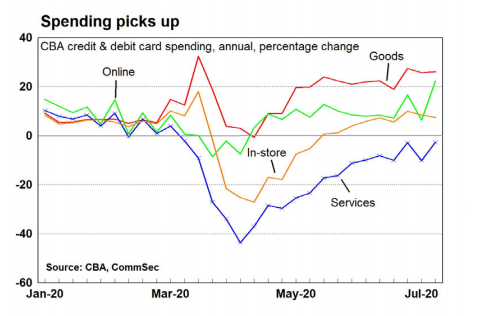 Further, Australia and New Zealand Banking Group Limited (ASX:ANZ) noted card spending data revealed that expenditure plunged 11.6% for the week to 18 July and 7.1% in Victoria. The data by ANZ indicated that expenditure on dining and takeaway declined 52% in Melbourne, while expenditure for housing in both Melbourne and regional Victoria fell by 57% and 26%, respectively.

There has been progress in household spending intentions, as parts of Australian economy reopened, but uncertainty remains amid rising COVID-19 cases in Victoria, and the subsequent second round of lockdown.