The Resource sector is among the top revenue generator of Australia, and with a solid performance in the recent past, the sector is gaining momentum in the market. The S&P/ASX 200 Resources Index, which tracks the resource players in the domestic market is on a bull run over the higher production volume by mining companies and reasonable commodities price at the marketplace and a favourable currency.

To Know More, Do Read: Resource Sector Continues To be the Strongest Pillar of GDP in 2020-21? 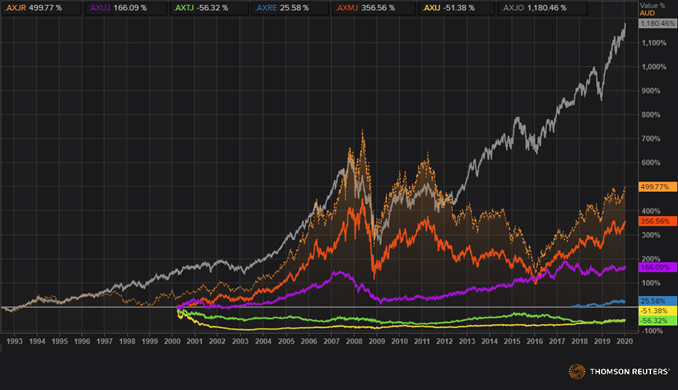 On comparing the significant sectoral indices, the S&P/ASX 200 Resources Index (AXJR) has relatively outperformed other major sector in the market and had closely tracked the S&P/ASX 200 index (AXJO) since inception.

Such an impeccable performance requires a tantamount performance from individual companies of which the index is composed of, and the resource players (energy and mining players) have not disappointed investors, which could be clearly inferred from the performance of the index. 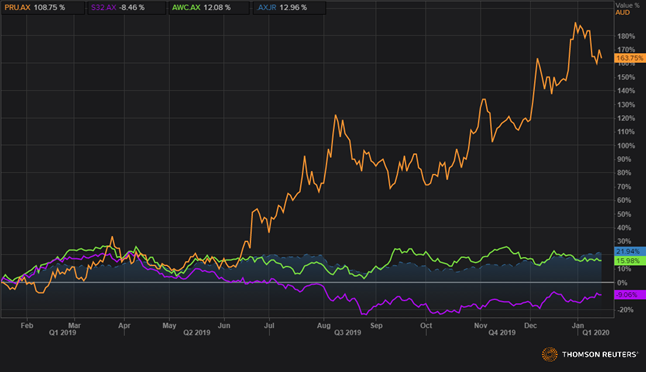 PRU is an ASX-listed gold miner with exploration and gold evaluation projects in Ghana, Cote d'Ivoire and Burkina Faso, in West Africa.

The company produced 69,155 ounces of gold during December 2019 quarter at a production cost of USD 843 per ounce. The all-in site cost for the production remained at USD 962 per ounce, and PRU managed to sell 61,176 ounces of gold at an average realised price of USD 1,145 per ounce.

The gold production of the company witnessed a quarterly increase of 5.05 per cent while marking an increase of 2.8 per cent against pcp for the December 2019 half-year.

AWC is an ASX-listed bauxite miner with refining and smelting operations and conducts its business activities mainly through its joint venture- Alcoa World Alumina & Chemicals (or AWAC).

Alcoa Bauxite segment performed relatively stable to generate an adjusted EBITDA of $132 million, down by ~1.50 per cent against the adjusted EBITDA of $134 million in 3Q 2019. Albeit, bauxite prices demonstrated a slight recovery, a small increase in other production cost pulled down the performance.

The stock of the company last traded at $2.300, up by 0.43 per cent against its previous close on ASX with a return of 1.33 per cent over the last six months.

S32 is an ASX-listed metal miner with business segments including Worsley Alumina with bauxite mine and alumina refinery in Western Australia. The company mainly deals in alumina, metallurgical coal, Manganese, and base metals such as lead, nickel, and zinc.

S32 alumina production witnessed a quarterly growth of 1 per cent to stand at 1,327k tonnes in December 2019 quarter, which took the overall first-half alumina production to 2,635k tonnes, up by 4 per cent against the previous corresponding period (or pcp).

The production summary of the quarter and 1H 2020 is as below:

S32 last traded at $2.850, unchanged against its previous close on ASX with a negative six-month return of 5.32 per cent mainly due to weak alumina prices in the global market; however, the last three-month return delivered by the stock stands at 15.38 per cent in the wake of recovery in base metal prices.