BARD1 Life Sciences Limited (ASX: BD1) operates in the medical line of business. The company, based in Australia, is a medical technology company which aims to develop and commercialise non-invasive diagnostic tests towards detecting an early stage cancer. It focusses on detecting the disease at primary stages and save affected lives. The company has a proprietary tumour marker platform which has the capability to focus on diagnostic and therapeutic applications through different forms of cancer.

BD1 is working towards autoantibody tests to help in detecting breast, ovarian and lung cancers in their primary stages. Moreover, diagnostic projects are in pipeline towards addressing more forms of the disease. 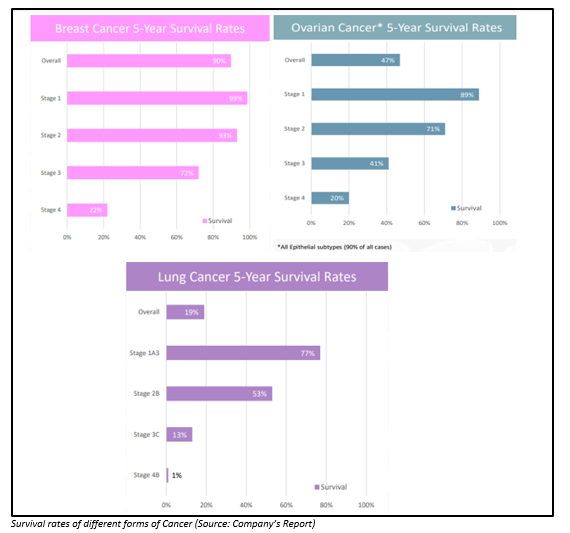 The scheme helps qualified Australian companies to invest in Research and Development activities across Australia. It offers cash rebates of 43.5% towards eligible R&D expenditure. BD1 had received a “R&D Tax Incentive – Advance and Overseas Finding Certificate” on 18th February 2019, from AusIndustry. It approved its R&D activities outside Australia as well. Hence, the company was eligible for the incentive for three financial years- 2017/18, 2018/19 and 2019/20.

In 2017/18, the company spent $1,196,594 towards research and development in Australia and overseas. The funds received would be utilised to further the development and commercialisation of the company’s diagnostics pipeline activities.

Besides the Tax Incentive refund, the company had also received an Issue Notification from the United States Patent and Trademark Office, earlier in May. This confirmed the patent “Regulation of BARD1 expression by non-coding RNA”. The patent claims were directed towards siRNA that focus and lessen the expression of the novel long non-coding BARD1 RNA molecule BARD1 9?L. The patent is due to expire on 12th July 2035.

As per the company’s quarterly report for the period ending 31st March 2019, the cash flow statement provided the below mentioned details:

During the half-year ended 31st December 2018, the company raised A$3.315 million through a non-renounceable Entitlement Issue and Shortfall Offer. Its cash position was recorded at $3.7 million. The BARD1-Breast cancer test portrayed positive results with high diagnostic accuracy to detect breast cancer and the same was for Ovarian cancer too. The company bagged two patents in USA (for Ovarian and breast cancer tests) and in China (For lung cancer tests).