Oil & Gas explorer, Armour Energy Limited (ASX: AJQ) today provided an update on Kincora Project’s well operations. It is reported that Myall Creek 5A & Myall Creek 4A wells transitioned into early production phase; however, technical problems in Myall Creek 5A resulted in a production halt and investigations are underway to resume production. 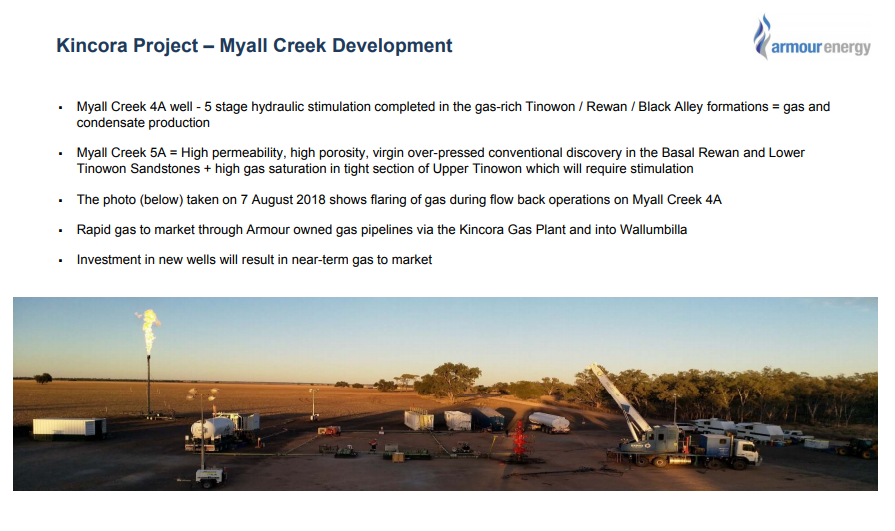 As per the announcement, AJQ connected the well to Kincora gas pipeline network along with the completion of planned work in the Basal Rewan formation to determine and test the conventional gas production potential. Also, an initial short?term flow rate of 2 million standard cubic feet per day (2MMscf/d) from the Basal Rewan was recorded through assessment of the well and post perforation, which is in line with the company’s initial geological prognosis of good porosity and excellent permeability. However, the target formation is reportedly producing formation water into the well, and initial flows were not sustained by well in Basal Rewan formation. Subsequently, the well had been shut down due to the influx of water formation.

It is reported that the Basal Rewansand is one of the four production targets identified in the well. Also, the company would develop a hydraulic stimulation of regional tight gas formations within the Black Alley and Tinowon Formations to increase the total hydrocarbons recovery from the well. Moreover, both Tinowon Formations are known to be hydrocarbon bearing formations, virgin over-pressured with low to moderate permeability.

According to the announcement, AJQ were engaged this month in a workover to isolate the formation fluids from entering the well, which would improve the production performance. Also, the workover comprised the installation of packers and sliding sleeve, which allow selective access to prime productive zones in this well.

AJQ asserted that the workover had been a success and well is producing at a stabilised rate of 500,000 standard cubic feet per day (scf/d) from two production zones, which are Tinowon B and Black Alley. The company had intended to target improved production and sales from this well through further testing in the remaining zones.

“The production results from the Basal Rewan formation in Myall Creek 5A have been disappointing. However, the 5A well has 3 other target reservoirs which are targeted to produce following stimulation which is currently being planned. Also, the drilling and completion of Myall Creek 4A and 5A wells has achieved a much greater understanding of the geology and reservoir characteristics in this field which will improve Armour’s ability to target the best formations and reservoirs going forward.

Through the drilling of these two wells Armour has delivered gas to the Queensland Domestic Gas Market and doubled its Proved and Probable (2P) gas reserves within 12 months. At present Armour holds approximately 105PJ of uncontracted 2P reserves, with strong interest from domestic customers for access to this reserve base.”