Jatenergy Limited (ASX: JAT) is an Australia registered company focused on selling Australian goods to consumer markets in China. On 6th June 2019, the company made an announcement about its participation in China’s 618 Shopping Festival. JAT, along with its subsidiaries, awarded special orders for 618 shopping festival of over $2.7 million. The orders received from various Chinese platforms comprised of pharmacies and major maternal stores. After Single’s day, the 618 Shopping Festival is China’s second most prominent e-commerce festival.

Today, on 11th June 2019, the subsidiary of JAT, Sunnya Limited has rolled out super premium goat infant formulas. In the release, the company stated that it has completed development of three new Neurio goat milk infant formulas, which will be sold in China, Macao and Hong Kong through e-commerce channels. The company has received its first order of newly launched product amounting to over $650,000.

HealthOne has been appointed as an Exclusive Distributor in Vietnam, Indonesia, Australia and Singapore by Sunnya Pty Limited, which is a subsidiary company of Jatenergy Limited. The products likely to be distributed under the terms of the agreement include:

The company published its Quarterly report for March 2019. During the quarter, the company reported revenues of $53.9 million for the nine months to 31st March 2019, while the gross revenue for the quarter was $20.53 million. However, in the month of March 2019, gross revenues stood at $8.07 million. The net cash used in the operating activities for the period was $0.732 million, which included product manufacturing and operating expenses, administration and corporate costs and advertising and marketing spend of $20.357 million, $0.432 million, $0.205 million, respectively. 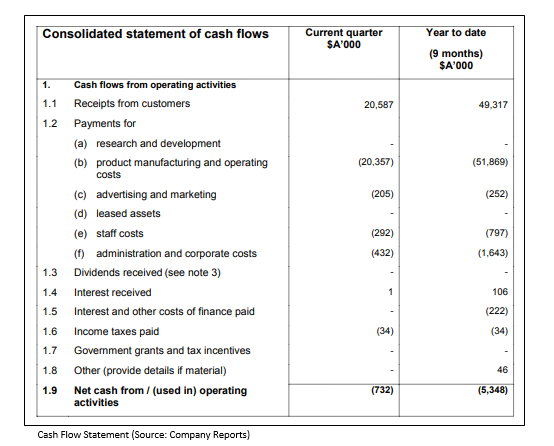 The company lately released its half-yearly results and reported revenues from ordinary activities for the period of $30,470,681 which reflected a rise of 1834% from $1,575,146 in 31st December 2017, driven by the successful acquisition of two subsidiaries during the half year. The group reported a loss after tax attributed to members of $21,215,621 for the six months to 31st December 2018.

The company is expecting an increase in sales as a consequence of numerous sales and distribution agreements signed during the March quarter. Jatenergy Limited is continuing to establish a manufacturing plant in Australia. Additionally, the company’s subsidiaries intend to launch new products and extend its footprint into new markets.

On 6th June 2019, the company and its partners Empresa Nacional de Diamantes E.P. and Rosas & Petalas made an announcement with respect to the launch of the next exploration phase in order to locate the kimberlite source of the high-value alluvial diamonds at the Lulo project in Angola.

The company communicated that the world’s peak-value alluvial diamond field, Lulo generated diamond sales of US$146 million till date at over US$2,000 per carat average price.

The kimberlite phase will develop on all the sampling, exploration work and previous drilling concluded by LOM and its Lulo partners in order to shorten the hard-rock diamond sources. Previously, LOM made a diamond recovery at Lulo. 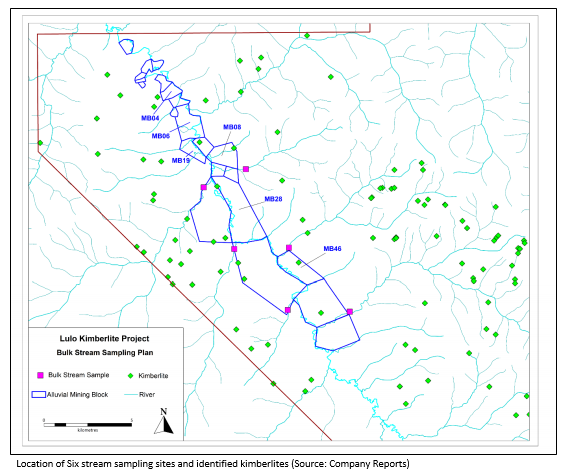 The company intended to excavate 5,000 meters bulk samples of alluvial gravels from each of these six tributaries. In addition, the bulk samples will be processed to recognise the catchment areas along with significant diamond concentrations.

The company reported exceptional performance from the high-value 1.1 Mtpa Mothae kimberlite mine in Lesotho in its first quarter of production, wherein it recovered 54% of carats ahead of its plan with 29% average diamond grade and 20% tonnes treated ahead of the plan as well as recovery of 138 +4.8 carat diamonds, which includes 42 specials and rare Type IIa and IIb diamonds.

During the quarter, LOM achieved a milestone of being a world’s highest US$ per carat alluvial diamond producer at the Lulo mine in Angola, with the first historic sale of Lulo diamonds made through international tender and recorded 73,257 bulk cubic metres in Wet-season plant treatment. There was a 90% increase in in-situ carats in the JORC classified Lulo alluvial diamond resource. Subsequently, the net cash used in operating activities stood at $2.694 million, which consists of exploration and evaluation expenses and administration and corporate costs of $0.293 million and $0.662 million, respectively. The company’s cash balance for the period stood at US$7.1 million. LOM paid US$1.9 million quarterly capital repayment on the company’s debt facility with Equigold Pte Ltd during the quarter. During the period, the company advanced its funding and refinancing discussions with New Azilian and Equigold in order to replace or reduce the higher-cost debt, which is used to fund the development of the new Mothae. 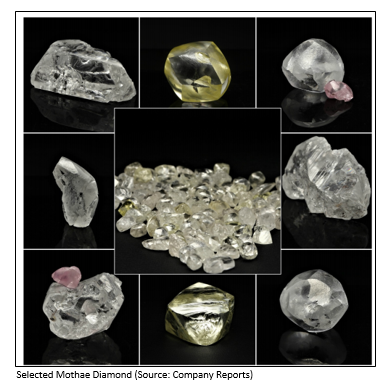