Belgravia: Hunting for large porphyry Cu-Au systems next to Copper Hill and 35km north of Cadia in the same Molong Volcanic Belt; and

KTA have recently  reported  Deep Ground Penetrating Radar (DGPR) interpretations from its survey of the historical Britannia Mine found within the Turon Gold Project.

The DGPR survey was recently carried out across the historical Britannia Mine gold workings, where:

The Turon Project lies within the Lachlan Fold Belt's Hill End Trough, a north-trending elongated pull-apart basin containing sedimentary and volcanic rocks of Silurian and Devonian age. The Britannia Mine forms the southern extent of the historical Box Ridgeline of gold workings which strike over a length of 2.4 km.

KTA contracted Loza Radar Australia (LRA) to undertake DGPR surveys to map the sub-surface geology and provide evidence of favourable hosting environments for mineralisation at the historic Britannia Mine and comprised of a total of 8 lines for 3,448 metres on a line spacing of ~70m.

There were several reasons for choosing the historic Britannia Mine for broader application of DGPR at Turon. These were as follows:

BHP targeted through drilling stacked saddle reef and related gold mineralisation. Drilling sought extensions both north and south of the main mineralised zone, which is associated with south plunging, an upright, tight anticline.

The mineralisation reportedly consists of saddle veins several metres thick at the crest of the anticline that decreases in width down the legs. Stockwork 'spur' zones extend up to 2m into the hanging wall zone.

Two critical anomalies were identified through the DGPR interpretation across Britannia and are believed to coincide with structurally controlled quartz veining. The relative depth differs these anomalies with a shallower anomaly that directly corresponds with the historic Britannia workings. A deeper anomaly offset from the known mineralisation is still untested.

The deeper anomaly, which coincidently is considered as the stronger of two, perhaps represents a parallel system that remains open in all directions and is untested by modern exploration with no evidence of historical mine workings or prospecting. 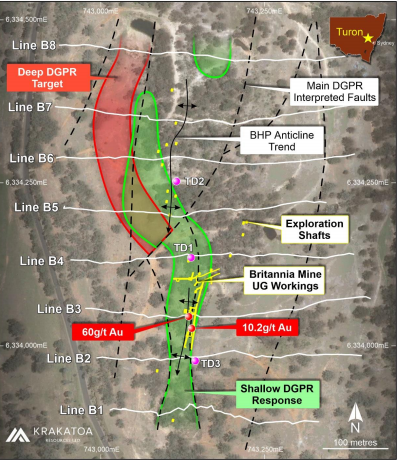 KTA identified several other near-vertical or steeply dipping structures through the survey. These structures are found to have corresponding substantially broad anomalous zones connected to alteration of the host beds in the country-rock. DGPR patterns were similar to those resulting from stockwork veins are observed on some lines.

More recently, KTA announced that the historical RAB drilling at the north of the Quartz Ridge Mine, which is located within Turon Project of KTA, has returned encouraging results. The results obtained are from a historical RAB drill program concluded nearly 30 years ago indicating highly anomalous gold intercepts with results up to 10m @ 1.64g/t gold.

Overall, survey response has been quite encouraging for KTA, and the Company takes assurance in the coincidence between DGPR response with the historical workings, known veining and drill-intersected mineralisation. Moreover, KTA expectations beyond a technical success and looks forward to implementing a drill program as soon as practicable.