Today, the market kept fluctuating between the green and red zone perfectly reflecting the comments of Reserve Bank of Australia, Governor, Philip Lowe that the future remains unusually uncertain. The benchmark index S&P/ASX200 ended at 5550.4 points, down by 0.41 per cent as compared to yesterday’s closure of 5,573.0 points.

As per Mr Philip Lowe, the first uncertainty is the pace of easing of restrictions, and if it can be faster, the economy can bounce back quickly. Another uncertainty is the people’s level of confidence in their health and finance. He also stated that it is in Bank’s own interest to support customers in the recovery phase.

Amid the uncertain situation, everyone is waiting for the medical breakthrough for the relentless virus creating havoc with people’s lives all around the world. Moderna’s vaccine trial gave much hope, but there is no data available to back the claims.

China is reportedly experiencing the second wave of the pandemic. The government enforced strict measures to curb the second outbreak. Parts of the country are under tight lockdown.

However, stocks that declined most are

Let’s see the graph below to view the top five best and worst performers of the day. 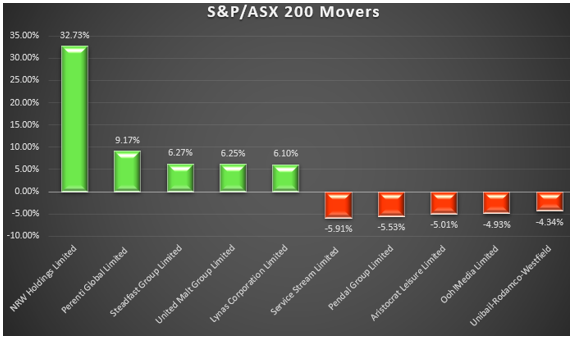