On 8 July 2019, Tyro Payments Limited, an Australia based business-only bank, unveiled its aspirations to investors of rolling out an initial public offering (IPO) in order to move from its current structure of a non-listed entity to a public company listed on the Australian Securities Exchange (ASX).

With plans to offer liquidity to its 450 shareholders, the company is also seeking other potential benefits that it might get after getting listed on the ASX. Tyro is seeking an IPO during the next 18 months. However, the listing is unlikely to take place before November 2019. The IPO plans are subject to market conditions and other relevant factors, according to a company announcement.

As a result of the recent announcement by the company, several big investment banks are getting themselves prepared for contesting for the role of lead mandate manager. Over the coming weeks, the Board is expected to call investment banks to pitch for joint lead manager roles.

Investment banks such as The Goldman Sachs Group, Inc., Macquarie Capital, J.P. Morgan Chase & Co., Morgan Stanley and UBS Group AG are expected to be in the race. Moreover, institutional equities teams at investment banks like Bank of America Merrill Lynch and Credit Suisse Group AG might pitch for a slice of Tyro Payments’ IPO, which is expected to be one of the biggest share market debuts.

As of now, the company has not provided exact details related to the likely offer size or timing; however, most of the companies of Tyro’s size trade at ten times of their revenue or above. With $ 76 million in the bank as on December 31, the big question is what the company would do with the proceeds raised with the IPO.

Let us understand the company a little better:

About Tyro Payments Limited: Tyro Payments Limited is a financial "fintech" institution, headquartered in Sydney, Australia. The company serves small and medium enterprises (SMEs) in the healthcare, hospitality and retail industries. It intends to offer innovative products and services to its clients to help them growing their business. The company started its business by offering cloud-based electronic funds transfer at point of sale (EFTPOS).

Today, the company develops and offers EFTPOS, as well as banking, bill payment and funding solutions. Moreover, the company is engaged in offering 24 hours, seven days customer support, connectivity, fraud prevention, and integration services. Recently, Tyro Payments rolled out lending and deposit products. The company plans to come up with several new services in the near future.

With its vision of becoming the most efficient acquirer of electronic card transactions in the country, the company operates under the supervision of the Australian Prudential Regulation Authority (APRA). Its in-house, cloud-based mobile core banking platform serves more than 20,000 businesses in Australia.

Tyro Payments’ API platform connects customers with point of sale (POS). The single integration point helps by lowering admin time and streamlining processes. Initially, the company’s platform is available to hospitality merchants. However, it plans to roll out the platform for its retail and health merchants in the future.

FY2016: Tyro became the first technology company in the country to secure a full bank licence. In the time period, it rolled out Tyro Smart Account, which was the company’s first banking product.

FY2015: The company launched the first Fintech Hub of Australia as well as developed a cloud based and mobile core banking platform.

FY2013: It became the first company to roll out integrated mobile EFTPOS solutions in Australia.

Tyro Financial Performance in H1 FY19: Tyro transacted $8.5 billion in H1 FY19, representing an increase of 31% on prior comparative period. The company also registered a record transaction value of $1.74 billion in the single month of December 2018, with its certified Point-of-Sale (POS) and Practice-Management System (PMS) partners surpassing 260. 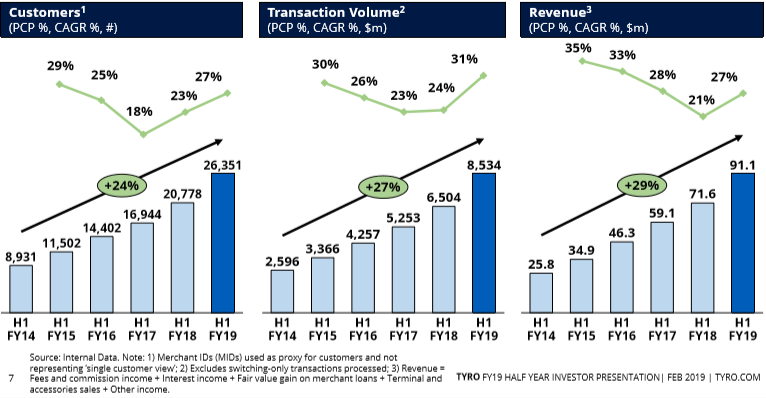 During the reported period, Tyro launched Tap & Save, enabling merchants to process multi-network debit (MND) tap-and-go payments through the more economical EFTPOS network, thereby allowing them to make more savings. This initiative was completed before the recommended deadline of April 2018. Since the launch, more than 6,000 merchants have saved collectively over $2.3 million on their merchant service fees.

In 2018, under its platform, the company entered partnerships with six leading POS providers in the hospitality sector. The collaborations are aimed at developing and providing a much-needed transformation to the connectivity between point of sale, apps and merchants.

Moreover, last year, the company also became the first bank in Australia to give access to a seamless, all-in-one EFTPOS solution with Alipay, which is the largest mobile and online payment platform in the world. The deal with Alipay would give Australian businesses a better access to the visitor market of China. In the year ended February 2018, 1.4 million tourists from China paid a visit to Australia, making a contribution of $ 10.4 billion into the economy.

Below is the figure depicting strong balance sheet for growth of the company: 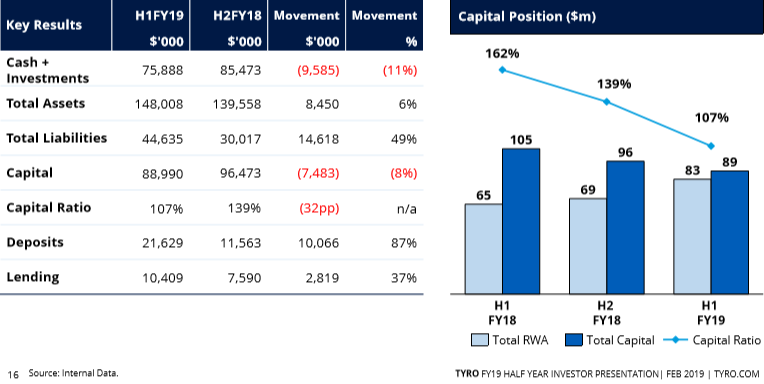 Outlook for H2 FY19: Tyro expects to register new and some increased costs from the acceleration of marketing activity, continued development of Tyro Platform, e-commerce solution and additional headcount. The figure given below the company’s performance in January 2019. 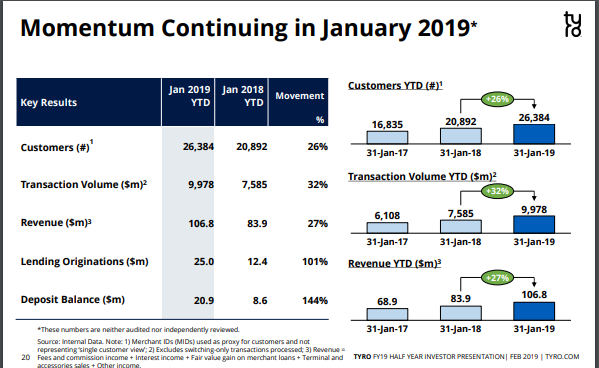 Robbie Cooke is the current CEO of the company, who joined Tyro Payments in January 2018.

Tyro is expected to mirror the growth pattern reported by the company in past years for the six months ended 30 June 2019.

Market experts suggest that Tyro Payments Limited holds the potential to become the next unicorn of Australia and fund its growth plans in the near future.