Being the 2nd leading cause of death around the world, cancer was responsible for approximately 9.6 Mn deaths in the year of 2018 as per stats submitted by the World Health Organization. The low and middle-income countries are most likely to be the victim of the deadly disease with the majority of deaths occurring in those regions. Lack of physical activity, use of tobacco and alcohol, low intake of healthy food and high body mass index are the few of the major reasons for around one-third of the deaths caused by cancer. Out of these, Tobacco is most likely to be the riskiest factor for cancer. The most common types of cancer include Lung, Breast, Colorectal, Prostate, Skin and Stomach cancer.

Early identification of cancer is the key to reduce the mortality rate. The diagnosis of cancer comprises three steps, which, when taken care of can help save many lives.

Kazia Therapeutics Limited (ASX: KZA) develops pharmaceuticals drugs. It has a portfolio of development candidates diversified across several distinct technologies and conducts pharmaceutical research and development. The company produces innovative drugs for a range of cancers. In an announcement dated 20th May 2019, the company signed a collaboration agreement with the Alliance for Clinical Trials in Oncology Foundation to launch a multi-centre Phase II study to identify the potential use of Kazia’s new drug, GDC-0084. An open-label Phase II study in patients with metastases will be conducted by Alliance. The trial will include up to 150 patients at multiple locations across the US. While Kazia will be responsible for providing support in the form of drug study and the financial grant, Alliance will take the lead in the study. The study is expected to begin recruitment in the second half of the calendar year 2019 and will take approximately two years to complete. According to another announcement dated 8th May 2019, The Bank of New York Mellon Corporation became a substantial shareholder of the company.

During the half-year ended 31 December 2018, the company reported a cash balance of $5.4 million as at 31st December 2018 when compared to $6 million as at 30th June 2018. The liquid assets amounted to $11.1 million in comparison to $12.5 million as at 30th June 2018. The reduction in liquid assets was largely due to a decline in the equity holding in Noxopharm Limited. During the period, the company paid $5.8 million for the advancement of R&D pipeline, which led to a notable reduction in cash burn from $9.2 million as on 31st December 2017. The company reported revenue from ordinary activities of $28,831, down 56.5% on the prior corresponding period value of $66,227. The operating expenses during the period amounted to $2,085,992 as compared to $4,456,589 in the prior corresponding period. 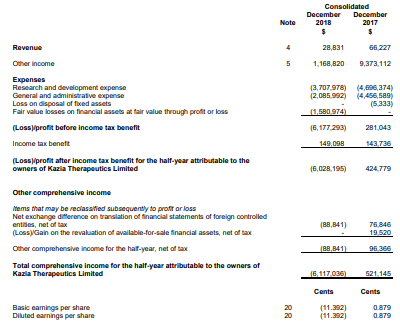 The current period was adversely impacted by a non-cash fair value loss of $1,580,974 on shares and options held. The company incurred a loss of $6,028,195 during the current period, which went down on the prior corresponding period profit by 1519.1%.

The company has in place a lead program, GDC-0084, being developed in the most common and most aggressive form of primary brain cancer, glioblastoma. It is expecting to release an initial report on the Phase II study, which is performing well, during the first half of the calendar year 2019. The program in aggregate now comprises three active clinical studies, including the one mentioned above, Phase I trial in collaboration with St Jude Children’s Research Hospital focusing on a type of childhood brain cancer and another Phase II trial in collaboration with Dana-Farber Cancer Institute in breast cancer brain metastases. Kazia’s Cantrixil program is also progressing well with a Phase I study in ovarian cancer underway. These two programs are critical in defining the future form and direction of the company.

Overall, the half-year period ending 31 December 2018 has not witnessed much of the company growth in terms of numbers, with the declining revenues and a lower cash balance in comparison to the prior corresponding period. The period also saw the operating expenses increase dramatically. Despite the above figures reported by the company, it has taken steps towards the development of the business with a lump sum amount spent on research and development for clinical trials of its products. With the research programs progressing well in the form of collaborations being undertaken by the company, there are chances that we will see Kazia shape a better future.

Immutep Limited (ASX: IMM) develops immunotherapy treatments for cancer and autoimmune diseases. The company engages in the treatment of cancer through the LAG3 immune control mechanism. Its key product is Eftilagimod Alpha, which is currently being tested in clinical trials to serve as a treatment for breast cancer and melanoma. In an announcement to the exchange dated 6th June 2019, the company notified the market about the enrolment of a very first patient for the INSIGHT-004 Phase I Clinical Trial. The patient has been enrolled in Germany. Being conducted in collaboration with Merck KGaA, Darmstadt, Germany and Pfizer Inc, the study is aimed at evaluating the safety and reliability of Eftilagimod Alpha, Immutep’s lead immunotherapy product.

As per the announcement for 1H19 earnings, the company reported no revenue as compared to $2.58 million in the prior corresponding period. The loss after tax for the period amounted to $8.67 million, up 100.7% on the prior corresponding period. However, the first half of FY19 was characterised by strong progress in its clinical development program and partnerships. The data reported from efti, the lead immunotherapy product, was favourable backed by the data from Phase I TACTI-mel clinical trial. It achieved a significant operational milestone during July 2018, after the approval of the company’s investigational new drug application for efti by US Food and Drug Administration. 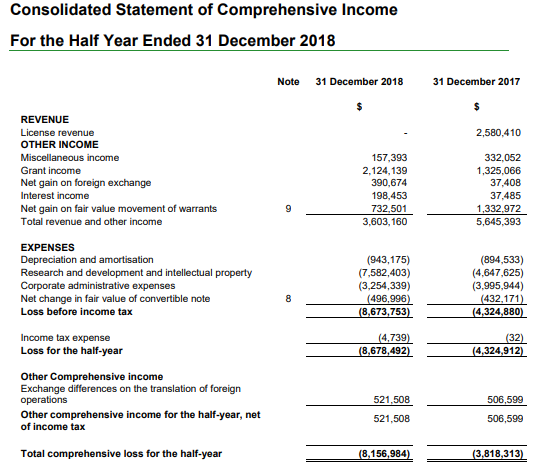 To test eftilagimod alpha as part of a cancer peptide vaccine, the company entered into a clinical trial collaboration with CYTLIMIC in March 2019. The company received another patent, namely ‘the derivatives thereof for Producing Monocyte Immune Response’ or Use of Recombinant LAG-3’ in the same month. For further business development, the company entered into another clinical trial collaboration with Merck KGaA, Darmstadt, Germany and Pfizer Inc. The agreement aimed at evaluating the combination of efti with avelumab. Immutep also completed US financing through NASDAQ listing and raised US$5.2 million in December 2018 to carry on with its LAG-3 clinical development programs.

Overall, IMM’s strategy of growth has been aligned with business development in the form of collaborations for clinical trials. The company has entered into partnerships with four of the world’s best 10 pharmaceutical companies (as mentioned above).