Is Growth Now Taking a U-turn for Webjet?

Webjet and Online Republic: The B2C travel business of the company operates its top OTA (online travel agency) consumer brand along with numerous leading brands in the market. It also provides matching travel products within the Online Republic business. The B2C business of the company was established in 1998. WebBeds: WebBeds helps in solving accommodation problems. Company offers B2B solution to its clients where a broad range of inventory is made available at the lowest possible costs. The B2B business was set up in the year 2013. The global B2B market as estimated by the company would be generating a total transaction value (TTV) of more than $50 billion in the coming years.

During May 2016, the company acquired Online Republic in order to support its core capabilities into appealing complementary travel divisions. This New Zealand business ranks amongst the top global e-commerce groups. It deals in online reservations of rental cars, motorhomes as well as cruises.

Financial Highlights for the year ended on June 30, 2019

FY2019 for the company was an exceptional year during which the company reported a record performance across all key metrics. 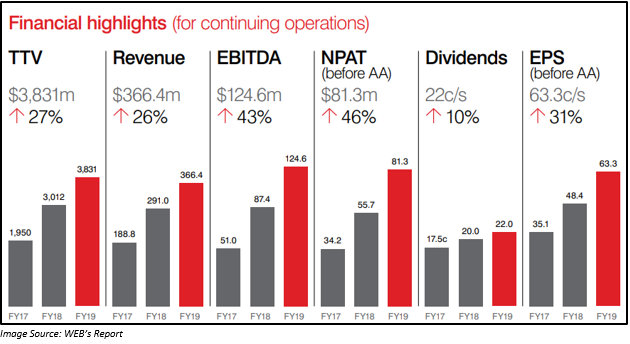 This business unit experienced an increased TTV and EBITDA margins in all areas. The business also felt challenges in the regions of Europe and the Middle East. Still, the unit delivered strong results in both the markets. It focused on selling contracted inventory directly and simultaneously improving margins. In North America, there was a solid growth in the bookings which supported EBITDA. APAC region remained the fastest growing B2B regions. The investment made in this region since the last two years has started providing a robust turnaround in profitability in the second half of FY2019. 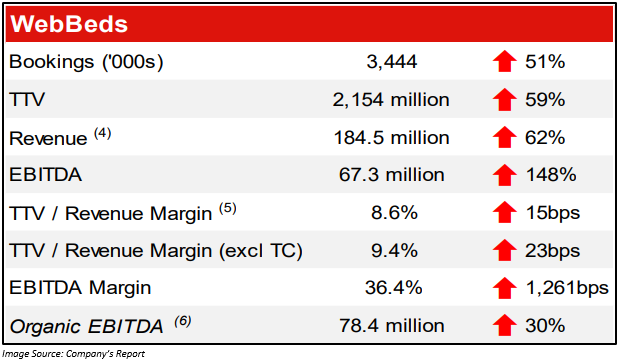 Webjet OTA (online travel agency) during the period, continued to gain market share. The flight bookings are growing double in the underlying market. Sales of higher margins products across air travel as well as additional products, led to growth in TTV margin.

During the period, the company focused on more profitable bookings with elevated TTV margins along with smaller acquisition costs. This resulted in an improvement in the TTV margin. However, the demand for travel in New Zealand, especially in Motorhomes declined after the Christchurch incident which took place during March 2019. The car division performed well during the period. On the other hand, Cruise continued as an underperformer.

For this segment, the company by FY2022 expects to deliver a profitability target of 8% revenue/TTV and 4% costs/TTV to deliver 4% EBITDA/TTV. The company also anticipates that its cost would grow at a lower rate as compared to the revenue which would be possible because of optimisation of IT platforms along with the ongoing impact of Rezchain (a leading blockchain solution from this industry).

The company in FY2019 results declared that it is optimistic about the growth opportunities in domestic as well as international flights along with growth in a variety of ancillary products.

The company would be focusing on increased TTV margin along with lower acquisition costs.

Headquartered in Mumbai, India, Thomas cook is an integrated travel and travel-related financial services company, as well as among the largest travel service provider networks. Thomas Cook is a customer of WebBeds B2B business and has recently entered compulsory liquidation.

On 23 September 2019, the company released an announcement related to the same and stated that it would impact its results for FY2020.

The company also clarified that it would not have any influence on 3,000+ hotel contracts which it acquired from Thomas Cook during August 2016. These are now completely owned by WebBeds and is made available for sale to the customers of WebBeds. Majority of these contracts at present is being sold to the non-Thomas Cook clients. It was the key reason behind the profitable growth of the companyâs European business in the last three years.

As indicated by the company in FY2019, it expected that WebBeds business would be earning further EBITDA in the range of $27 million to $33 million in FY2020 from various factors which also included Thomas Cook. Now, with the collapse of Thomas Cook, the company expects a fall in its EBITDA by $7 million.

Webjet has a track record of giving a strong result in the last five years. After seeing the whole picture, one cannot deny that compulsory liquidation of Thomas Cook would have significant impact on the financial health of the company. But itâs just a phase which the company would soon overcome as other parts of the business are not being impacted.

CLICK HERE FOR YOUR FREE REPORT!
Tags:
webjet latest news ASX: WEB
All pictures are copyright to their respective owner(s).Kalkinemedia.com does not claim ownership of any of the pictures displayed on this website unless stated otherwise. Some of the images used on this website are taken from the web and are believed to be in public domain. We have used reasonable efforts to accredit the source (public domain/CC0 status) to where it was found and indicated it below the image.