Is Apple vouching for an old design revival - Strategy 2020

Technology Sector makes up a large part of economy with high employment rate. The enhanced quality of life and growth in opportunities is enabled with the help of technology. This improves fundamental tasks and interactions using AI, blockchain and quantum computing that present significant opportunities for people, businesses and the broader economy.

Founded in 1975, the consumer electronic giant entered the smartphone market in 2007 and has released its latest mobile, iPhone 11 pro on 10TH September 2019. The launch was a success and Consumers are already looking forward for 2020 designs. According to the reckons, Mac Pro desktop looked like as it had in 2013 and is selling at its full price. The company is coming up with extremely limited upgradability in an evolving world. Looking at the new wave, the company is expanding into wearables including Apple watch and AirPods. Apple is famously secretive and there is gossip around company’s every move. Like all of the Apple’s product, each new launch is a progress over the previous one.

Apple update Final X Pro with a new metal engine which would help improve playback and graphic tasks. The Company is slated to release updates to motion and compressor with same model metal engine and performance optimisation. It is available for free to its current users but would cost around $299.99 for the new users.

Apple’s next launch may mark the new era as Company might shift beyond the smartphones. It is said to be working on the new AR headset and unveiled its new technology and significant changes in other products.

iPhone 2020: These might come up with significant design with metal frame similar to that of iPhone 4.

AirPods 3: The Company may also launch AirPods 3 with improved water resistance and possible noise cancellation. These may come in early FY20. In March this year, Apple launched the earbuds allowing the control of volume, which could be switched between the Apple products. These were completely wire free and offer around 5 hours of battery life.

2020 iPad Pro: The 3D camera feature might show up in iPad Pro models first. No major changes are planned for 2019, it is expected that the company might launch this product in FY20.

AR smart glasses: Apple is working on reality smart glasses and might come up with it in 2020. It is expected to come up with a dedicated display, reality operating system, voice activation, touch panels, hand gestures which is said to support applications from mapping to texting.

The Company may cannibalise itself with Apple Arcade, the mobile gaming subscription service. It came with a free trial for a month and could be shared with the family at a cost of $5. Apple earns about 30% cut of all subscriptions, contributing to the growth in its important services. Apple Arcade has the potential to upend the high gaming market, reshaping the industry with higher revenues and increased subscriptions of up to 420 million with the goal of 500 million paid subscriptions in 2020. 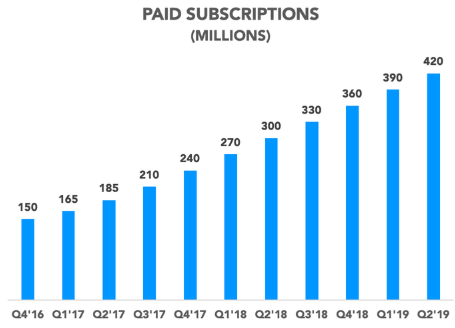