Gold, Crude Oil, and Bitcoin -Through a Chartist’s Lens

To Know More, Do Read: All That you need to know About Global Commodities Action in 2020, Hits and Misses

While the COVID-19 outbreak has disrupted the demand and supply equation for many commodities, a study of price action or the field of technical analysis could be used to navigate such volatile and unprecedented times.

Gold on a Daily Chart 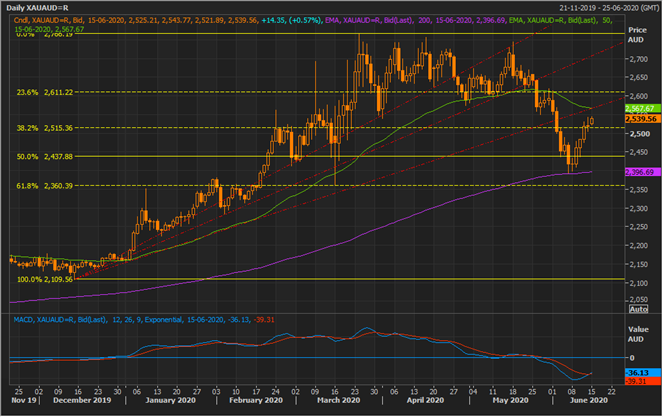 Post correcting over 50 per cent, the gold spot has again picked momentum with prices now reaching levels of $2,539.56 (as on 15 June 2020 5:23 PM AEST) and testing the 1/3 fraction of the Fibonacci fan projected by connecting the initial rally point to the record high.

The gold spot took the support around the 200-day exponential moving average after a 50.0 per cent correction, representing that the primary trend remains bullish. Furthermore, the 12,24,9 MACD indicator is now showing a positive signal.

However, the spot is currently trading below the 50-day EMA, reflecting on the short-term price correction or the secondary downtrend.

In future, if the prices breach the 1/3 fraction of the Fibonacci fan, which is a decisive resistance- as it is overlapping with the 50-day EMA, and confirms the breakout (sustains and closes above the breakout high for two consecutive trading session), it would mark the continuation of the primary uptrend and could further seed bullish sentiments. 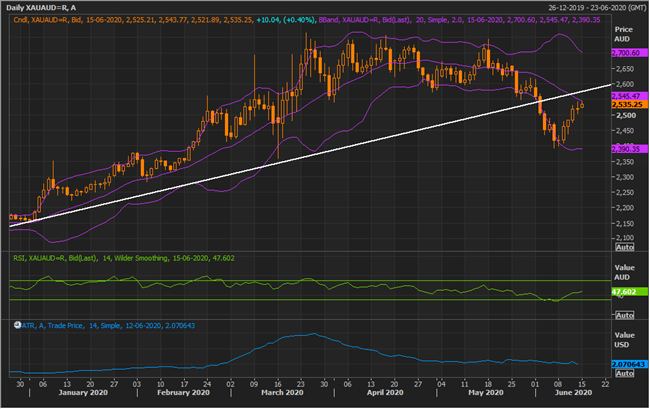 It should also be noticed that while the gold spot had broken down below the medium-term support line, currently gold is retracing back to the resistance line.

Furthermore, the gold spot took the support of the -1 Standard Deviation of the 20-day simple Bollinger band and did not confirm the volatility breakout post breaching the trendline support, which could also be noticed through the Average True Range, which remained relatively flat despite the trendline breach, confirming that the recent move was a specialist breakout.

Also Read: Gold Slips Below USD 1,700 Per Ounce, ASX-Gold Stocks At the Brim of A Top

Crude oil on a Daily Chart 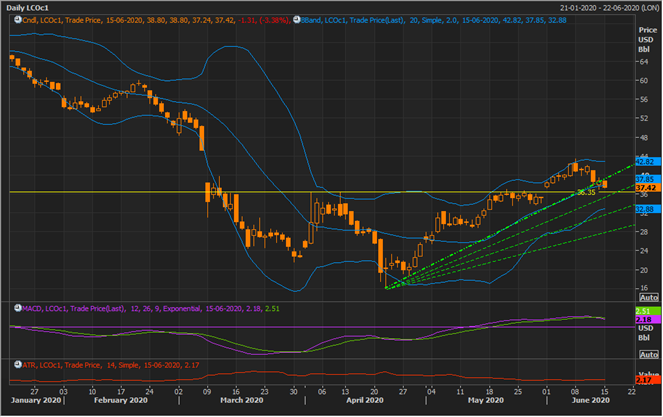 On following the daily chart, it could be seen that crude oil prices have breached the short-term resistance line of a primary downtrend, and filling the gap that was created in March,  reflecting that the commodity has now entered the secondary trend (a short-term uptrend), which is currently testing its original breakout from USD 37.42.

On connecting the recent low with the recent high and projecting a Fibonacci fan, it could be seen that the commodity is now poised to test the 1/1 fraction of the Fibonacci, which would act as the primary support for the price- as it is coinciding with the horizontal support level of USD 37.42.

It should also be noticed that crude oil prices have given a breakdown below the short-term trendline, which is yet pending confirmation. Also, as the 1/1 fraction of the Fibonacci fan and the mean value of the 20-day simple Bollinger band are overlapping and it should be considered as a decisive support.

The major support for the oil price is at the 1/2 fraction of the Fibonacci fan, which is overlapping with the -1 SD of the Bollinger band.

The 12,24,9 MACD indicator is showing a negative signal, while the ATR is relatively flat.

Bitcoin on a Daily Chart 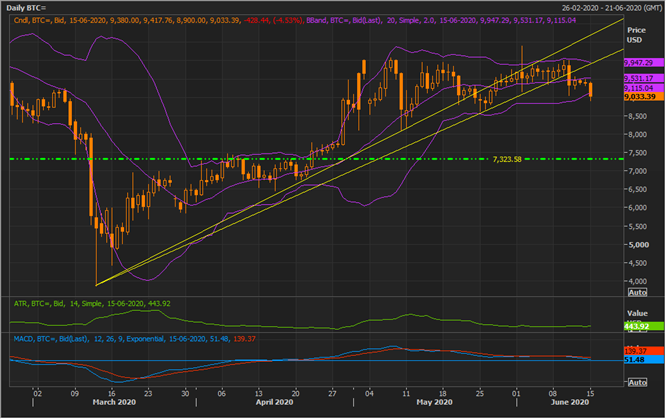 On following the daily chart, it could be seen that bitcoin prices have now breached its medium-term support zone (space between the two trendlines) and has also given a volatility breakout with prices breaching the -1 SD of the 20-day simple Bollinger band with a slight increase in the Average True Range, which could be an early indication of the change in the primary uptrend.

The 12,24,9 MACD indicator is also giving a negative signal, reflecting that the commodity is poised for entering the secondary trend. The major support for bitcoin is at USD 7,323.00.

Also Read: Bitcoin Gains Momentum Ahead of Halving Day Deadline; What Are Chartist Looking At?