An increase in usage of the internet raises the chances of cyber threats and online scams. The solution to this resides in blockchain technology, which is a much safer and secure platform. Blockchain is a record-keeping technology that offers an unmatchable layer of trust to the users. This technology is unique in the sense that it has a decentralised and distributed nature.

Blockchain is a type of data structure used in specific distributed ledgers which stores the data and transmits it in packages known as blocks. These blocks are then connected in a digital chain where the blocks of records are verified and maintained. For recording and synchronising the data, blockchains employ algorithmic methods and cryptographic techniques.

For example, blockchain is used by several economies around the globe for maintaining their land records and transactions related to buying and selling of land. By placing the transactions on a blockchain, the use of paperwork is eliminated with barely any possibility left to forge the land data records. 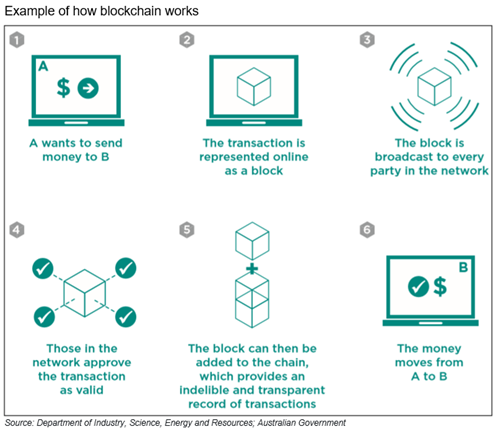 From ‘disruptive’ into ‘mainstream’:

Blockchain is considered as a disruptive technology and businesses face problems in its integration due to the lack of well-versed technical teams in this field. Blockchain-as-a-Service (BaaS) companies play a role in helping other companies integrate their respective businesses with blockchain technology in a much smoother and simpler way. BaaS channelise the integration process with no harm or disruption in the routine processes of a business.

BaaS companies have confirmed the blockchain’s feasibility in many businesses around the globe, thereby, facilitating the movement of this technology from ‘disruptive’ to ‘mainstream’.

The World Bank has created a Kangaroo bond, which is the first bond developed, allocated and managed through its life cycle using blockchain created DLT. The bond has three joint lead managers, namely RBC Capital Markets, Commonwealth Bank of Australia and TD Securities.

Blockchain activity types can be divided into three categories, as follows:

The popularity of using blockchain technology is increasing and is cherished by several stock exchanges all around the globe. The exchanges are also exploring the best options to leverage this technology, to gain its invariable benefits to tighten the trading securities and lower the risks.

Other than NASDAQ, London Stock Exchange and many others, the Australian Stock Exchange is another stock exchange that is in the process of replacing its ageing Clearing House Electronic Subregister System (CHESS) with blockchain technology (Distributed Ledger Technology, DLT). CHESS manages the settlement and clearing process of its equities.

Looking at the contribution of Australian blockchain activities by considering various industries, Financial and insurance services head the list (as presented in the figure below). Professional, scientific and technical services are the second-largest contributor, followed by Retail trade. The adoption of blockchain by the financial and insurance services can be justified by the nature of the financial market and application of the technology in Bitcoin and digital currency.

Around 50 per cent of blockchain activities in Professional, scientific and technical services, and financial and insurance services are of facilitative nature. 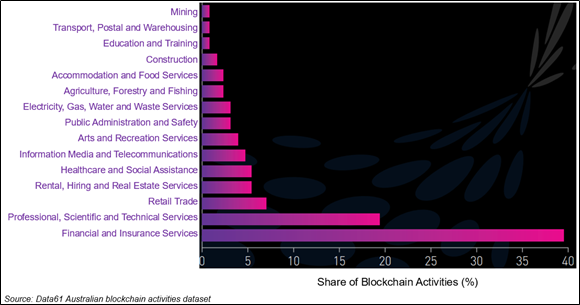 Some of the recent updates from ASX listed companies using blockchain technology in their businesses.

Interesting Read: Is The Crypto and Blockchain Fever Over For Now - CCA, AB1, DCC, FFG, ICI