It is a no secret that every investor looks for returns post making his or her investments. Returns can be in the form capital appreciation or dividends paid by the company. Capital appreciation means getting return due to the increase of share price over a span of time. On the other hand, a dividend is a mode of return, where the company declares a share of profit, which is payable to the shareholders. However, the dividend is subject to the discretion of the company as it is not an obligation for the company. Because sometimes the company decides to reinvest the profit in order to provide strength to the business.

The below we discuss few dividend stars of Australian Stock Market, that have consistently pleased the shareholders with the decent set of dividend numbers.

Altium Limited (ASX: ALU) is in the sales as well as the development of computer software for the designing of electronic goods, the company recently announced that Mitsubishi UFJ Financial Group, Inc. has ceased to become a substantial holder in the company on 15th November 2019. The company was scheduled to conduct its 2019 Annual General Meeting on 6th December 2019. Where the company was primarily considering the following business items:

In FY19, the Board of the company has declared a final dividend amounting to $18 cents per share, unfranked, with a rise of 26% in full-year dividends in comparison to the previous year. 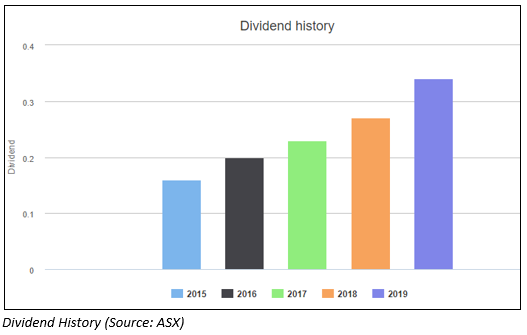 Southern Cross Media Group Limited (ASX: SXL) is the business of creation and airing of content on free-to-air commercial radio (AM, FM and digital), TV and online media platforms.

Also, Read A Guide to media and advertising industry.

As on 6th December 2019 closing price, the shares were trading with a dividend yield of 8.86%.

Whitehaven Coal Limited (ASX: WHC) is in the development and operation of coal mines in New South Wales with its controlled entities.

Also Read: How Whitehaven is eying on Asian Thermal Market?

The Board of directors of the company declared a final dividend amounting to 21.0 cents per share, fully franked, which was paid on 1st November 2019. This took the total dividend for the year ended 30 June 2019 to 33.0 cps, reflecting 96.77% of profit after tax and non-controlling interests.

A look on DRP