A Look at the Major Banks: NAB versus CBA and ANZ

On the backdrop of tepid economic growth, the banking sector seemed to perform decently in the recent past. The economy is seeking early indication of acceleration of the real estate sector, which would eventually have a positive impact for the banking sector in the coming quarters.

During the recent past, the banking sector witnessed higher provisioning, higher expenses followed by tepid customer deposit growth. The two stalwart banking names NAB, and CBA reported a decent performance in the first half of FY20 owing to the tepid sectoral scenario while, investors will be waiting for the upcoming performance of ANZ which is due on this month.

However, the growth in the banking sector will depend upon the loan growth rate, consumer confidence and central bank’s interest policy.

Moving ahead, let’s have a look at the three stocks from the banking space.

Also, the company reported 3% higher expenses due to timing and nature of technology and higher investment, combined with higher performance-based compensation. Credit impairment charges stood at $185 million, decline 21% the 2H19 quarterly average, primarily due to non-repeat of both NZ dairy impairments and the impact of house price movements during H2FY19.

Asset quality remains broadly sound, with the ratio of more than ninety days past due and gross impaired assets to gross loans and acceptances broadly stable at 0.94 percent. The Group’s LCR rose to 129% for the quarter ended 31 December 2019. Average liquid assets witnessed an increase from the prior quarter with a marginal decrease in net cash outflows. 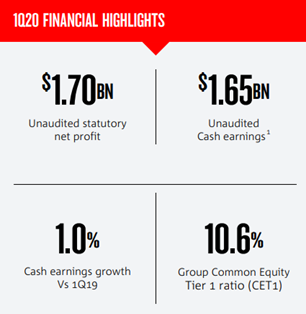 Commonwealth Bank of Australia is indulged in banking business and provides a wide range of banking and related services.

Key Business highlights for H1FY20: CBA declared its 2020 half-yearly results for the period closes 31 December 2019, wherein the company reported statutory profit of $6,161 million, witnessing a growth of 34% on y-o-y basis. Cash NPAT, during the period stood at $4,477 million, declining 4.3% on pcp terms. The business reported CET1 at 11.7%, reflecting an increase of 90 bpts. Customer deposit, during the period stood at $68 billion, depicting a growth of 4% from H1FY19. Advances to customers was up by 5% at$89 billion during H1FY20.

The business reported its operating income at $12,416 million, remaining flat from $12,408 million in H1FY19 on account of core volume growth followed by stable net interest margin and lower insurance claims. Operating expenses during the half period stood at $5,429 million, as compared to $5,289 million in previous corresponding period. The period was marked by cost efficiency, offset by higher wage inflation and information technology expenses and higher expenses from Elevated risk/compliance. The business reported loan impairment expense of $649 million, as compared to $577 million due to provision related to the drought/bushfire.

However, during the half period, the business reported lower consumer arrears and stable TIA. The funds management segment witnessed a 12% growth in revenue. Cost to income ratio on cash basis stood at 36.7%, which reflected an increase of 220bps. The business reported cash net interest of 2.13%, witnessed a decreased of 10bps. CBA reported impairment losses on financial assets at $22 million, indicating a decline of 51% from H1FY19.

Provider of banking and financial products along with related services, Australia And New Zealand Banking Group Limited provides banking and financial products and services to individual and business customers. The business informed that it would release its December 2019 APS330 Pillar 3 disclosure on 20 February 2020. Apart from that, the half-yearly results would be declared on 30 April 2020. Ex-dividend date for interim dividend will be announced on 11 May 2020, while record date for interim dividend will be declared on 12 May 2020.

On 3rd February 2020, the company declared its sale of its OnePath Pensions & Investments (OnePath P&I) business to IOOF Holdings Limited (ASX: IFL) at a price consideration of $850 million, including ~$25 million, which has been received for the sale of its Aligned Dealer Groups in October 2018.

On 22nd January, ANZ informed the issuance of US$1,250,000,000 fixed rate subordinated notes due July 2030 pursuant to its US$25,000,000,000 Medium-Term Notes Program. The Subordinated Notes convert into fully paid ordinary shares of the Issuer where the Australian Prudential Regulation Authority decides the necessity on the grounds that the Issuer would otherwise become non-viable.