Letâs now have a look at the four resource stocks as enlisted below.

Lithium Consolidated Limited (ASX: LI3) is an Australia registered company, which is engaged in the exploration of lithium. Recently, the company via a release dated 14th August 2019 announced that it has entered into a binding agreement with Argosy Minerals Limited (ASX: AGY) through its wholly owned subsidiary company- LCME Holdings Inc. The objective behind the establishment of agreement is to sell the Tonopah Lithium Project for an upfront cash payment and an additional milestone payment. Adding to that, the other parties to the agreement includes Big Smokey Exploration LLC, ProspectOre LLC, and ProspectOre Inc. companies which are associated with Mr Gordon Addie. LI3 further stated that it would hold an Extraordinary General Meeting on 10th September this year.

Under the terms of the agreement, Argosy Minerals Limited will be paying an option fee of US$10,000.00 in order to have the right to buy the Tonopah Lithium Project and the Mining Claims, via exercising the option on or before 26 August 2019. The purchase consideration comprises of an upfront cash payment of US$50,000.00, which is payable at the wrap up and a further milestone payment of A$500,000.00 payable. The company further stated that the sale of Tonopah Lithium Project is anticipated to close by minimum 5 business days, post exercising of its option by AGY on a date, which has been specified by it.

As per the investor presentation, released on 8 August 2019, the company is undertaking a capital raising, which would amount to around $1.2 million via non-renounceable pro-rata Entitlement Offer, which includes 1 New Share in lieu of 4 Shares held by Eligible Shareholders. It was also mentioned in the release that an additional offer to other investors of fresh shares would be made on the same terms as the Entitlement Offer in order raise up to an amount of $2.0 million with issue price of $0.05 per new share. The following picture provides an overview of the utilisation of raised funds: 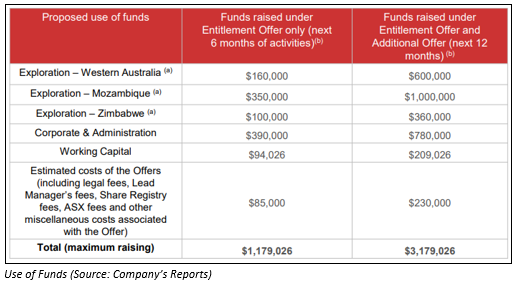 An Australian entity, Argosy Minerals Limited (ASX: AGY) is into the work of exploration of lithium and other minerals. Recently, the company has entered into a binding agreement with the subsidiary company of Lithium Consolidated Ltd (ASX: LI3)- LCME Holdings Inc. (as stated above).

Also, the company published its quarterly report on 30 July 2019, for the period ending 30 June 2019, wherein, it stated that it has commenced the production of Lithium carbonate for supplying high-value product from industrial scale pilot plant. In addition, the AGY has joined the exclusive list of international producers of lithium carbonate. In March 2019 quarter, the company had raised an amount of ~$9.1 million via entitlement offer, which was noted as oversubscribed. During the same quarter, the company had continued fast-track development strategy at the Rincon Lithium Project. 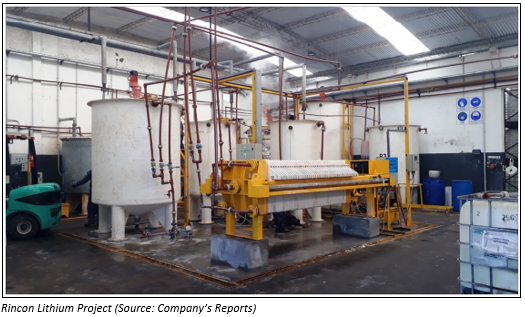 The company is planning to continue lithium processing operations for the production of LCE product for delivery into executed Sales Agreement, as well as focusing towards getting regulatory approval to start construction of the commercial 2,000 tpa lithium carbonate processing plant operation.

During the June quarter, the net cash outflow from the operating activities stood at A$0.620 million after settling payment for exploration & evaluation and administration and corporate costs amounting to A$.095 million and A$0.420 million, respectively.

Galilee Energy Limited (ASX: GLL) is an Australia registered company, which is involved is development and exploration of hydrocarbons. Galilee Energy Limited was listed on Australian Stock Exchange in 1996. Recently, the company with the help of a release dated 14th August 2019 has updated the market on Glenaras multi-lateral pilot programme. The Glenaras multi-lateral pilot programme is 100% owned and operated by the company. It further stated that Glenaras multi-lateral pilot programme has continued to perform strongly and has represented excellent rates of water. It stated that all the 5 lateral wells were flowing at water rates of more than 6,200 BWPD. Additionally, the company is expecting that production would scale up over the upcoming weeks in order to achieve full reservoir drawdown.

The companyâs cash used in the operating activities for the quarter ended June 2019 stood at A$5.560 million after paying primarily for exploration & evaluation of A$4.847 million. By the end of the quarter on 30 June 2019, the company had maintained a strong cash balance of $11.6 million with zero debt. 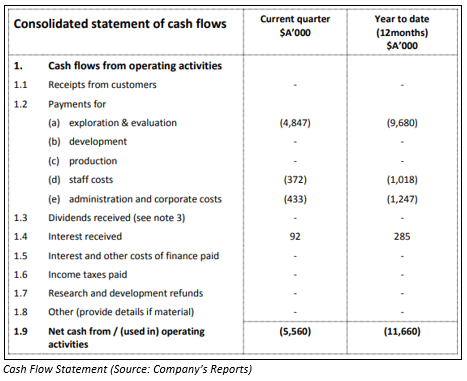 RBR Group Limited (ASX: RBR) is into provisioning of labour, training and professional services in Mozambique. On 19 August 2019, RBR notified on the appointment of a Non-Executive director â Athol Murray Emerton, an international logistics specialist.

Recently, the company via a release dated 14th August 2019 announced the opening of a training center in Palma on 1st August 2019, which is situated near LNG construction sites. The company has commenced to offer training to the prospective workers for the jobs, which will become available on the LNG projects, which is also the objective of opening the training centre.

The company further stated that tin relation to the Catalisa Youth Training Program, which is an initiative step by the Anadarko-led Mozambique LNG Project, where it had recently trained 100 young residents of Palma in entrepreneurship, other soft skills and basic English language skills. However, the Mozambique Construction Green Card requirement has been secured by the first group of students. 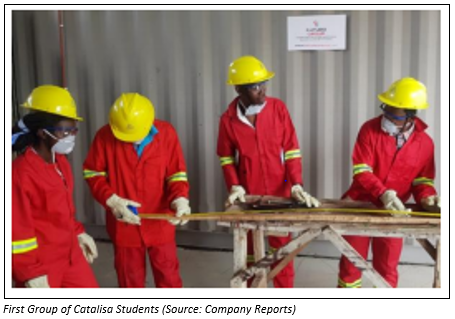 In another update, the company announced the appointment of Ms Jessamyn Lyons as Company Secretary of the Company, which was effective from 2 August 2019.

During the quarter ended 30th June 2019, the companyâs operational receipts from customers in Mozambique stood at A$118k, which witnessed an improvement on the March quarterâs A$68k. The company is in talks with current shareholders as well as market players who are committed to finance RBR going forward. The net cash outflow from the operating activities stood at A$0.430 million.