The Australian companies having big operations in Britain are potentially vulnerable to the risks triggered by the Brexit debacle. Britain is an important market for many companies trading on the Australian stock exchange, and its exit from the European Union is likely to result in significant consequences for these companies. Many of these companies generate significant amounts of earnings from the UK and Europe, raising concerns among the market analysts over the growth prospects of such companies.

Let us have a look at some of the companies trading on the Australian Securities Exchange (ASX) having exposure to the UK market:

Headquartered in Sydney, QBE Insurance Group Limited (ASX: QBE) is a general insurance and reinsurance company that offers personal, commercial and speciality products and risk management solutions to its customers. The company has over 12,000 employees working in more than 31 countries. The company is now recognized as one of the top 20 insurers and reinsurers globally.

The company has earlier informed that it has a fully operational and well?capitalised insurance and reinsurance company located in Belgium in response to the Brexit challenge. QBE Insurance Group received High Court approval for its post-Brexit restructuring plans during a hearing in December. The company mentioned about the successful renewal of its existing business in continental Europe in its FY2018 annual report.

The companyâs average premium renewal rate from European Operations demonstrated a rise of 4.4 per cent in 2018 compared to a reduction of 0.2 per cent in 2017. The combined operating ratio of European Operations also improved from 95.2% in 2017 to 94.8% in 2018. QBEâs UK motor, financial lines and international property continued to gain from the strongest rate improvements. 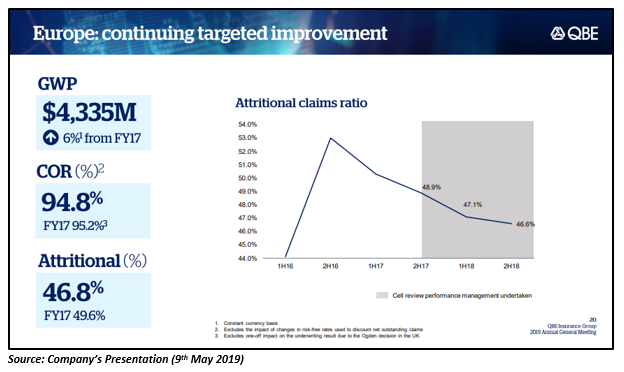 An Australia-based fintech company, IRESS Limited (ASX: IRE) develops, designs and delivers technology for the financial services industry. The company is among the leading suppliers of innovative technology solutions for clients in the wealth management, financial markets, and mortgage sectors. It has its operations in New Zealand, Australia, South Africa, the United Kingdom, Asia and Canada.

The company released its Annual Report 2018 in February this year for the period ending 31st December 2018. The company reported 8.06 per cent increase in its revenue from ordinary activities from ~$430 million in 2017 to ~$464 million in 2018, driven by the revenue growth in Australia and the UK. 32 per cent of the revenue growth came from the United Kingdom, reflecting key client deliveries and product uptake. The successful progression of client projects as anticipated by the company accelerated revenue growth in the second half in the UK.

The revenue in the UK increased 13 per cent on a reported basis and 7 per cent on constant currency basis against pcp, reflecting ongoing projects to deploy IRESSâ integrated wealth and trading solution at key clients.

The company does not expect a significant direct impact from Brexit, given the predominantly domestic focus of its UK clients. Also, the company expects its 2019 annual revenue growth rate to be similar to that of 2018. 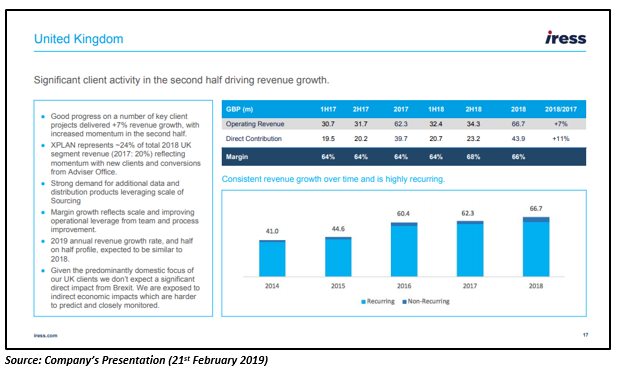 In May 2019, CYBG PLC released their interim financial report for the six months to 31 March 2019. The group delivered a resilient underlying financial performance in H1, announcing a total underlying income of Â£843m in the first six months that was in accordance with H1 18 and H2 18. The Pro forma profit before tax stood at Â£9m during the period, impacted by significant acquisition and integration costs associated with the acquisition of all the voting rights in Virgin Money Holdings (UK) plc in October 2018.

The underlying operating expenses of the group fell from Â£493m to Â£480m in H1 19 and are expected to be less than Â£950m in FY2019. The fall in the operating expenses was due to the cost savings delivered through the Groupâs cost efficiency and integration programmes. 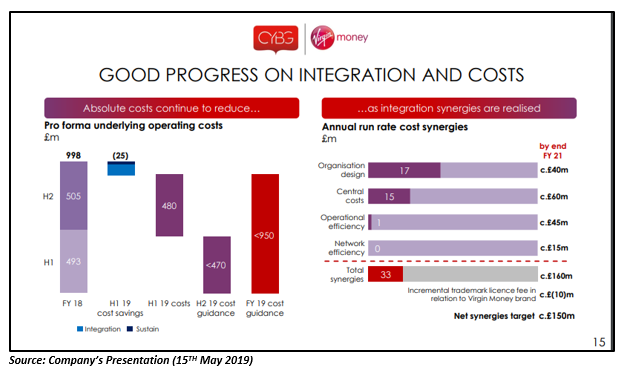 The FSMA Part VII transfer of the assets and liabilities of Virgin Money PLC to Clydesdale Bank PLC is expected to complete by the end of the calendar year 2019.

A New Zealand based public software company, Xero Limited (ASX: XRO) offers cloud-based accounting software services, helping more than 1.8 million subscribers worldwide transform the way they do business. The company was founded in 2006 and was identified as the Worldâs Most Innovative Growth Company in 2014 and 2015 by Forbes.

A number of strategic initiatives were undertaken by the company during FY19, including the acquisition of Instafile, a UK tax filing and compliance tool. Along with this, Xero got registered as an Account Information Services Provider with the UK Financial Conduct Authority, allowing it to take advantage of the UK open banking regime.

On 16th May 2019, the company announced its full-year earnings to 31st March 2019. Delivering strong progress in cash generation, top line growth and profitability, the company reported a 36 per cent growth in the operating revenue to $552.8 million, and an increase in its Free cash flow by $35.0 million during the period. 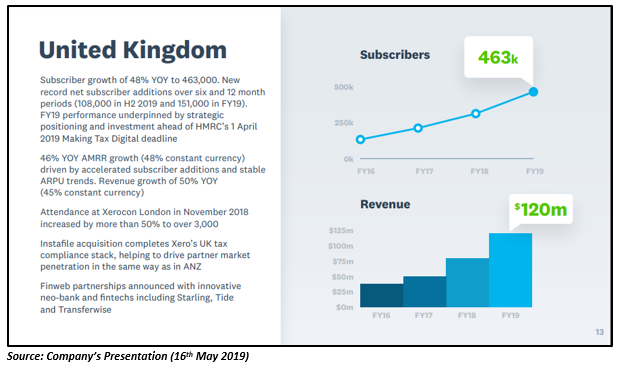 The company published its financial results for the full year ended 31 March 2019 on 3rd May 2019. The companyâs net profit was up 17 per cent in FY19 to $A2,982 million relative to FY18. The company reported a Net operating income of $A12,754 million in FY19. 66 per cent of the total income was generated offshore including EMEA, Asia and the Americas. 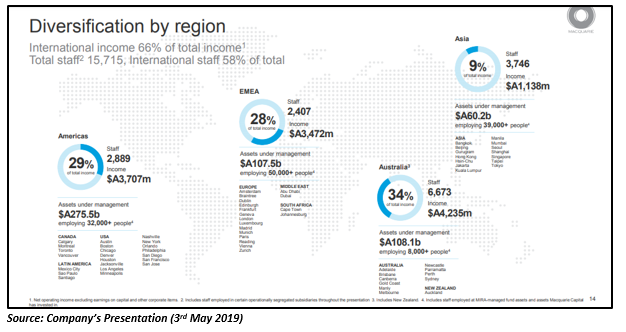 The company does not think that Brexit will be a material event for the Group. The company informed that the three of the four targeted new licences are now in place, and the progress on licence applications to supplement existing EU licences is well advanced. Also, the company has made contingency arrangements for a small number of clients who could be affected if the UK leaves EU without a transition agreement. Macquarie expects a continuation of its longstanding and deep commitment to the UK in the future.