The UK based casual dining restaurant company Yo! Sushi is planning to present detailed financial information to City analysts this week in preparation for its upcoming initial public offering (IPO), according to a Sky News media report.

According to the report, Yo! Sushi’s owner, the Snowfox Group, earlier known as Mayfair Equity Partners, will be presenting to London analysts.

The group plans to announce its potential public listing on the London Stock Exchange (LSE) as early as next month in mid-October; however, a specific date has yet not been confirmed. The company is reportedly expected to have a market value of over £750 million with the IPO.

According to the report, the IPO will be managed by investment bank Numis Corp PLC.

Yo! Sushi and the Snowfox Group 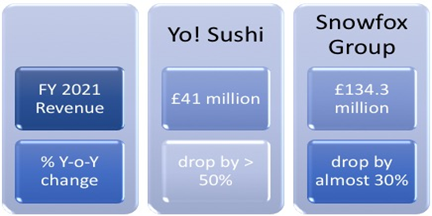 Yo! Sushi’s revenues dropped by over 50 per cent to £41 million from £91.7 million in FY 2020 due to lockdown restrictions related to store closures and also due to Covid-19’s impact. Yo! opened an additional 17 kiosks inside supermarkets, increasing the total number of kiosks to 52 in the UK, to offset the effects of sales drop.

UK-based private equity firm Mayfair Equity Partners is the majority shareholder of the Snowfox group, a multi-channel Japanese restaurant chain. Some of Snowfox group’s restaurants include packaged sushi brand Taiko, US and Canada based sushi chains Snowfox and Bento, and UK-based YO!

Yo! Sushi operates about 65 restaurants in the UK and is popularly known for its conveyor belt style delivery of Japanese food at its restaurants.

The Snowfox group sells over 60 million trays of sushi per annum and also supplies to retailers and supermarkets such a Tesco (LON: TSCO) and Waitrose in the UK. The Snowfox group recently changed its name from Snowfox earlier this year in June in order to reflect the accelerated growth of its US based operations.

Yo!’s restructuring of its business by minimising overhead costs, other expenses and by focusing on opening more supermarket kiosks helped offset the impact from Covid-19, helping it to be better position ahead of its potential IPO.

Moreover, as the restaurant industry is witnessing a revival following the easing of restrictions, a Snowfox IPO could aid in boosting Yo! Sushi’s business growth, the company stands to benefit from an IPO if it is well timed to capitalise on the IPO boom.