OTEX to NVEI: Should you buy these Canadian technology stocks?

The S&P/TSX Capped Information Technology Index dipped by about four per cent on Tuesday, August 9, ahead of the expected US inflation data for July to be out on Wednesday, August 10. Economic stress stemming from growing inflation and borrowing rates may keep pressuring the tech space in the near term.

However, when looking for long-term growth exposure, investors can explore the following technology stocks selected by Kalkine Media®.

Open Text is a large-cap software company focused on offering information management solutions. Open Text is expected to distribute a quarterly dividend of US$ 0.243 on September 23, up from the previous payment of US$ 0.221 per unit. The Canadian tech provider said that revenue from its cloud services and subscription segment increased by 14.3 per cent to US$ 411.6 million in Q4 2022. Total revenues amounted to US$ 902.5 million in Q4 2022, representing a year-over-year (YoY) jump of one per cent.

The OTEX stock tanked by approximately 26 per cent in 52 weeks. According to Refinitiv data, OTEX stocks had a Relative Strength Index (RSI) value of 40.43 on August 9.

Shopify saw its total revenue climb 16 per cent to US$ 1.3 billion in the second quarter of FY2022. The e-commerce infrastructure provider said that the latest quarter’s revenue denotes a three-year compound growth of 53 per cent. The large-cap company aims to streamline the logistical process via a fulfilment network along with Deliverr, which was acquired earlier in July.

The SHOP scrip sank by almost 73 per cent year-to-date (YTD). As per Refinitiv findings, Shopify stock recorded an RSI value of 50.23 on August 9. 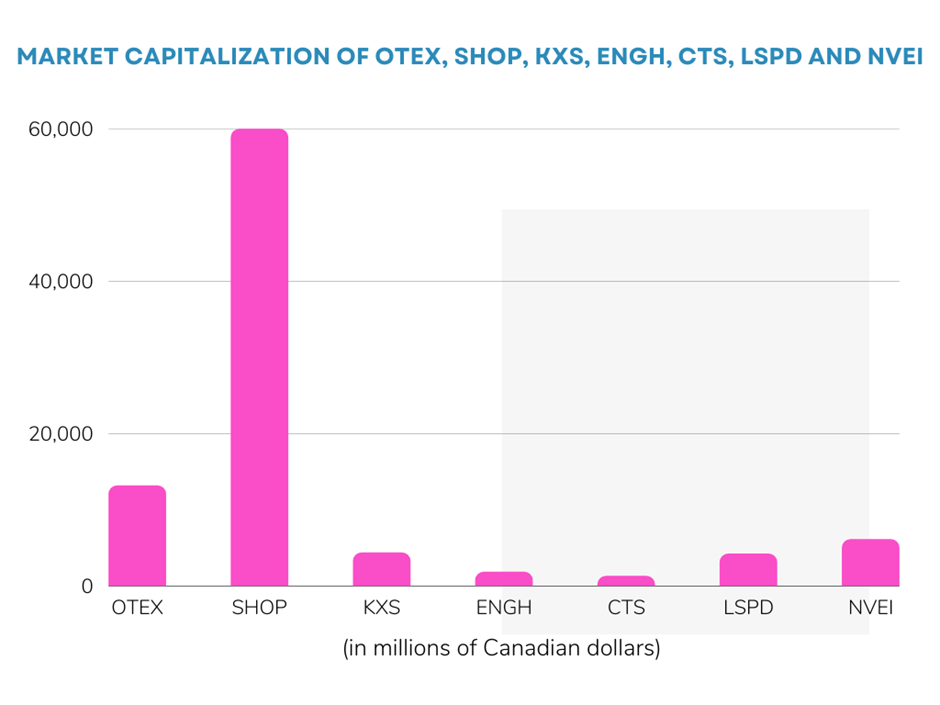 Kinaxis is a mid-cap company providing cloud-based software capabilities for supply chain management and sales and operational planning (S&OP). Kinaxis said its total revenue amounted to US$ 80.8 million in the second quarter of 2022, up by 35 per cent YoY. Kinaxis also updated its total revenue guidance range, now US$ 355 million to US$ 365 million, for fiscal 2022, compared to the previous range of US$ 345 million to US$ 355 million.

The KXS stock shed about 11 per cent this year. However, this tech stock gained by almost 19 per cent in three months. On August 9, KXS stock appeared to be on a medium trend with an RSI value of 58.01, according to Refinitiv information.

Enghouse recently mentioned that an Enghouse Interactive division, Enghouse Vidyo extended its partnership with telehealth platform, ViTel Net to expand its turnkey telehealth solution. Enghouse is set to distribute a quarterly dividend of C$ 0.185 on August 31.

The ENGH stock surged by over 15 per cent quarter-to-date (QTD). However, this TSX-listed technology stock was still down by about 49 per cent from a 52-week high of C$ 64.42 (September 7, 2021). According to Refinitiv findings, ENGH stock held an RSI value of 62.86 on August 9, denoting a moderate-to-high momentum.

The CTS stock tanked by almost 46 per cent this year. According to Refinitiv data, the CTS stock’s RSI value was 51.29 on August 9.

Stocks of Lightspeed Commerce shrank by almost 45 per cent in 2022. As per Refinitiv, LSPD scrips recorded an RSI value of 51.81 on August 9.

Nuvei Corporation is a mid-cap fintech company. Nuvei reported a 38 per cent increase in total volume to US$ 30.1 billion from US$ 21.9 billion posted a year ago. The financial technology company stated that e-commerce accounted for 87 per cent of total volume. Nuvei posted revenue of US$ 211.3 million in the latest quarter, reflecting a growth of 19 per cent from US$ 178.2 million in Q2 2021.

The TSX technology index gained by over 10 per cent QTD. Growth investors with a long-term perspective could explore these TSX tech stocks to unlock significant capital gains. Open Text and Enghouse also dole out a dividend, which could increase your passive income streams.