Copper is a metal that is soft and malleable, and its use is widespread. As it is known, copper is used in electric cables and wires. Based on its precision and high conductivity, copper is also used in construction materials, industrial purposes, and for fulfilling plumbing needs.

In recent times, with the emergence and need to uphold climate change requirements, industrialists have found a way to use copper in clean and emerging technologies. Copper is lately being used as a material in the manufacturing of electric vehicles and solar cells.

With the growing need and demand for electric vehicles and zero-emission vehicles, many analysts expect copper production to increase multi-fold. In Canadian regions like British Columbia, Ontario, Quebec, etc., a lot of copper mines are located, and copper is produced.

On that note, let us look at some of the Canadian copper stocks amidst soaring prices.

The company explores, develops, and produces copper, and its flagship copper mine is located in southern British Columbia. Copper Mountain Mining produces 90 million pounds of copper on an average each year.

The senior leadership of Copper Mountain Mining, in its latest report, stated that the company commenced operation of the third ball mill at the copper mine located in British Columbia.

In the second quarter of the fiscal year 2021, Copper Mountain Mining produced 29.6 million pounds of copper. Its revenue was C$ 142.1 million in the same quarter.

The stock price of the copper-producing company soared by 186 per cent over the past year and closed at C$ 3.06 apiece on September 22. It also traded nearly 248 per cent above its 52-week low price of C$ 0.88 on this day. 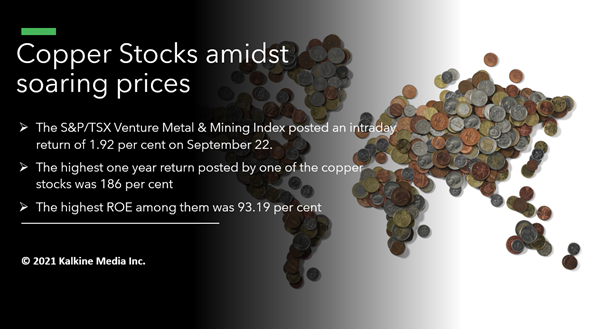 The base metal company is engaged in producing and selling copper from one of its properties in Brazil and selling by-products made from gold and silver. Ero Copper held outstanding shares of 88.4 million and a market cap of C$ 2 billion on September 23.

The metal and mining company focuses on producing copper from its property located in Chile. The management of Three Valley Copper Corp announced the commencement of a mine drilling program in its Chile-based property, as per the latest report.

Three Valley Copper posted revenue of US$ 7.5 million, and adjusted EBITDA was US$ 0.13 million in Q2 FY21.

The company sold 1,010 tonnes of copper cathodes during the same quarter.

The C$ 335.01 million market cap is a company engaged in exploring copper from its Marimaca Copper Project. The project is perceived to be a low-risk one. As per the latest report, the company discovered new shallow oxide copper at the Mercedes Target.

Over the past year, the stock price climbed up by 22 per cent. However, on a quarter-to-date (QTD) it dipped by five per cent.

The company evaluates and explores royalty projects and assets based in Canada. Golden Valley Mines and Royalties debuted on the Toronto Stock Exchange Venture after the successful launch of its initial public offering (IPO) on December 20, 2001.

Golden Valley Mines and Royalties held a market cap of C$ 176.32 million and a P/B ratio of 6.78. The outstanding shares of the company were 13.74 million (at the time of writing).

On a QTD basis, the stock price rocketed by 101 per cent, and over the past year, it expanded by 60 per cent.

Copper is a rare metal that does not degrade and loses its chemical composition even after recycling. With the increasing demand for electric vehicles and the need for copper to be used to produce batteries and cells, many analysts believe that copper stocks have a lot to deliver in the future.