The Bank of Nova Scotia (TSX:BNS) announced results for the fourth quarter and full-year on Tuesday, November 30. It said that it will raise its quarterly dividend by 11 per cent to C$ 1 per share.

The dividend hike move comes after Canada's banking regulator lifted the ban on dividend hikes and shares buybacks. Due to the COVID-19 pandemic, the regulatory authorities had restricted the banks from hike their dividends.

Apart from increasing the dividend, Scotiabank said that it will repurchase around 24 million of its shares. That said, let's take a look at the financial performance of one of the biggest banks in the country and find out if it is worth your time and money:

Is Bank of Nova Scotia (TSX:BNS) a buy? 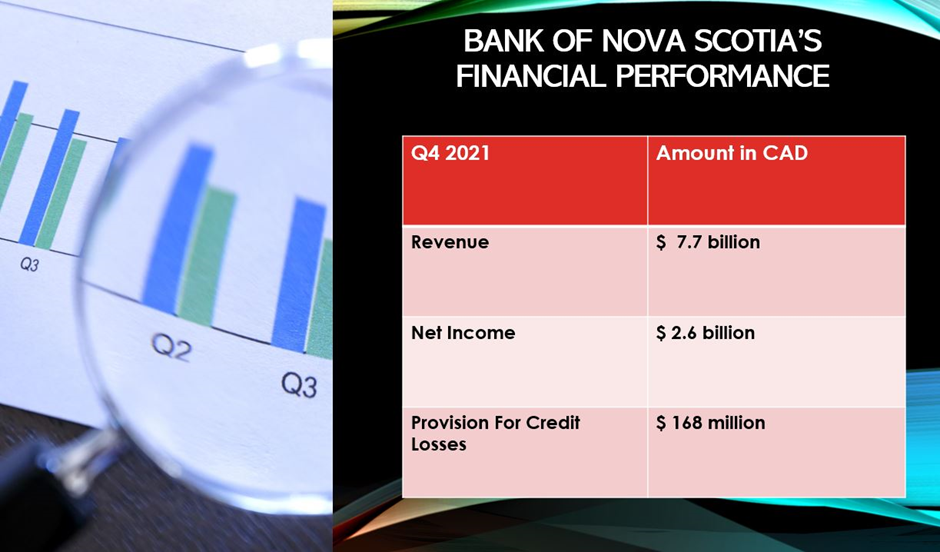 Beating the analysts' estimates, Scotiabank earned C$ 2.1 per share on an adjusted basis. Notably, the estimates were that the bank would earn C$ 1.91 apiece.

In the latest quarter, Scotiabank produced solid financial results due to improvement in credit quality. Scotia's provision for loan losses declined to C$ 168 million in comparison to C$ 380 million in the third quarter of this year.

Brian Porter, Chief Executive Officer and President at Scotiabank said that a diversified business model helped the bank sail through the pandemic crisis, and it is well-positioned to achieve its full earnings potential in 2022.

The Bank of Nova Scotia's return on equity increased to 14.8 per cent in Q4 2021 in comparison to 11 per cent in the same quarter of the previous year.

In terms of stock performance, the BNS stock has surged 18.4 per cent year-to-date (YTD) and during this period it beat the TSX 300 Composite Index as it declined by 2.4 per cent.