Bank stocks in general are usually some of the most stable stocks for investors to consider. They generally tend to stay aloof from the daily histrionic trends in the stock market. And it’s certainly no fool’s errand to invest in stocks of Canadian banks.

Canada’s big banks are some of the largest in the world and they certainly punch above their weights. The sector is massive in the country and one of the most lucrative ones. One of the reasons Canadian banks command so much respect is probably because it was relatively unscathed when the financial crisis of 2007-2008 hit.

So, let us delve into the stocks of the “Big Five” banks and their performances.

Considering its market cap of over C$ 187 billion, the Royal Bank of Canada (RBC) is Canada’s biggest bank. It’s also one of the country’s oldest, having been founded in 1864 in Halifax, Nova Scotia. Today, it is headquartered in Toronto and offers a diverse range of financial services.

In Q3 2021, RBC recorded a net income of C$ 4.3 billion which was 1.1 billion more of the corresponding quarter of the previous year, an increase of 34 per cent.

Toronto-Dominion Bank is the second of the largest Canadian banks. It is also a bank that has a considerable presence in the U.S.

Q3 2021 saw the bank post an adjusted net income of C$ 3.63 billion, up in comparison to the corresponding quarter last year which was 2.33 billion.

The Bank of Nova Scotia is a truly international institution with a base in several countries across the world. It is Canada’s third-largest bank with a market capitalization of C$ 98 billion.

In Q3 2021 the Bank of Nova Scotia had an adjusted net income of C$ 2.56 billion compared to C$ 1.3 billion in the third quarter of 2020. The top management of the bank attributed the performance to having a diversified business model. 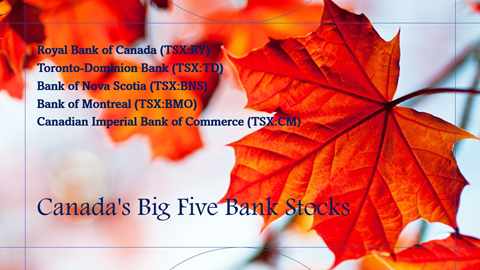 The fourth-largest of Canada’s Big Five banks is the Bank of Montreal with a market capitalization of C$ 85 billion. Launched in 1817, it is the country’s oldest financial institution. In partnership with the BMO Financial Group, it has significant operations in Chicago.

Canadian Imperial Bank of Commerce (CIBC) is the country’s fifth-largest bank. Serving 11 million customers and businesses it holds a market cap of C$ 66 billion. The CIBC stock’s ROE was 15.58 per cent and EPS was 13.1. On October 19, it held a dividend yield of 3.95 per cent.

Investing in the stocks of Canada’s big banks is not a fool’s errand. That said, it can’t be called foolproof either. The stocks of these banks generally tend to grow in the long run if not the near to medium term. The above also offer dividends and that income is not an insignificant bonus.