Canadian banks have been prevented from hiking their dividends or buying back shares since March 2020 due to the pandemic.

Some market experts believe that this has not only triggered a significant capital pile-up for the banks, but could also make way for a notable dividend hike once the Office of the Superintendent of Financial Institutions (OFSFI) lifts the prohibition.

In a report published on Tuesday, October 19, Toronto-based investment firm Hamilton Capital Partners said that the present earnings and capital of Canadian banks could support a dividend increases of 20 to 25 per cent immediately. This surge, the report said, could take place even if their earnings were to be completely stalled.

Dividend payouts are often something that many investors like to look into when exploring a company’s stock. Keeping this report by Hamilton Capital in mind, let us look into the stocks and dividend payouts of the top five Canadian banks.

The top Canadian lender, which holds a market cap of about C$ 187 billion, pays a quarterly dividend of C$ 1.08 per share.

This dividend is set to be paid to shareholders who invested in RY stocks before the ex-dividend date of October 25.

The Toronto-based bank distributes a quarterly dividend of C$ 0.79 per piece.

This dividend inflated by 6.69 per cent in the past three years and by 8.41 per cent in five years.

Toronto-Dominion Bank’s dividend yield stood at 3.56 per cent on October 20, and it is scheduled to pay out its dividend on October 31. 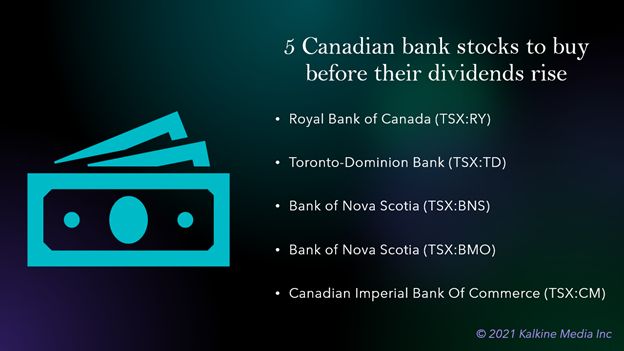 The Bank of Nova Scotia, commonly known as Scotiabank, is scheduled to pay its shareholders a dividend of C$ 0.9 apiece on October 27.

Scotiabank’s quarterly dividend held a yield of 4.44 per cent on October 20.

The Bank of Montreal’s dividend yield was 3.17 per cent on October 20. It ex-dividend date is October 29.

BMO’s dividend grew at a notable rate of 10.43 per cent in the last five years.

Known as CIBC in short, this bank is on course to doll out a dividend of C$ 1.46 per share.

CIBC pays its dividends on a quarterly basis, and is scheduled to pay its next one on October 28. Its ex-dividend date was September 27.

The Canadian Imperial Bank of Commerce posted a market cap of about C$ 66.6 billion on October 20.

Hamilton Capital Partners’ report from Tuesday also noted that, as per their research, dividends of Canadian banks are likely to hike this quarter as there is “no policy justification for the moratorium to continue”.

While any sort of official confirmation is yet to come, a possible dividend hike for Canadian banks could be something investors could explore further.