Black Friday is known to be a shopping opportunity for consumers in North America and people are already showing excitement about some of the discount and shopping deals.

Due to this surge in purchase, retailers often make higher sales during this time of the year. There are many Canadian retailers like Aritzia, Loblaw, Maple Leaf Foods, etc. that are likely to experience big crowds, giving way to amplified sales and increased revenue.

Investors could consider the following five TSX-listed consumer stocks that can bring Black Friday cheers to them as well. 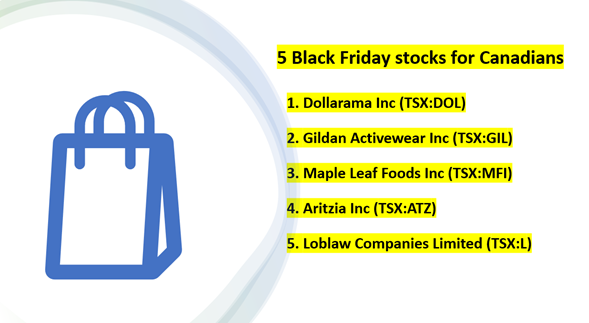 Dollarama Inc, a Montreal-based company that operates discount retail stores, saw its stock wrap up trade at C$ 57.46 apiece on Thursday, November 4, up by 2.315 per cent. It hit a day high of C$ 57.48 during the session.

DOL’s stock marked a nine-month return of more than 12 per cent, while it grew by almost 22 per cent year-on-year (YoY).

In the second quarter of fiscal 2021, Dollarama posted a YoY surge of 16 per cent in its sales of C$ 1.029 billion. It reported a YoY rise of 4.3 per cent in its diluted net earnings of C$ 0.48 per common share in this quarter.

Its stock price hit a one-year high of C$ 51.75 during this session following the announcement of its Q3 FY2021 results.

Its one-year return shot up by nearly 70 per cent. On a year-to-date (YTD) basis, its stock price was up by roughly 43 per cent.

Gildan Activewear, which owns and operates vertically integrated designing business, posted a YoY surge of 33 per cent in its third quarter sales of US$ 802 million this year.

Glenn J Chamandy, the president and CEO of the company, said that the third-quarter result was an outcome of enhanced business economics supported by its “Back to Basics model”, team work and the demand recovery.

It also yielded a one-year return of nearly 23 per cent and a YTD gain of roughly nine per cent.

Its meat protein business reported a top line growth of 13.4 per cent in sales of C$ 1.15 billion in this quarter.

Also read: Is MTY Food Group (TSX:MTY) a stock to buy and hold?

Aritzia Inc, known for integrated design business that includes exclusive fashion brands, witnessed its scrip hit a day high of C$ 49.04 on November 4. Its stock price was up by 0.164 per cent to C$ 48.8 per share at market close on this day. 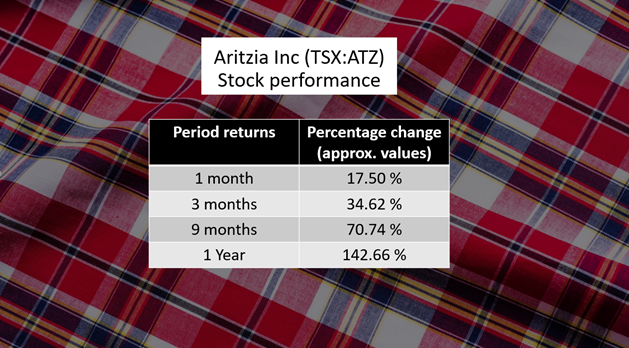 On a YoY basis, ATZ stock rocketed by nearly 143 per cent, while its YTD return stood up by more than 89 per cent.

Stocks of Loblaw Companies Limited, a Canadian retailer that operates grocery, pharmacy and general merchandise stores, rose by 1.809 per cent to C$ 95.67 apiece at the end of trading session on November 4.

Its stock price also swelled by almost 54 per cent over the previous nine months.

Black Friday is known to see retail companies draw in a shopping rush with big deals and discounts, which, in turn, often results in increased revenues.

Investors who are looking to explore the retail space can consider these consumer stocks ahead of Black Friday. However, it is crucial to assess and evaluate risk and return factors before making any investment.