Although Mark Cuban is best known as the Dallas Mavericks owner and a Shark Tank investor, it turns out he has invested in several companies with diverse business operations. The list of businesses that Mark Cuban Companies owns or has invested in often attracts investors' attention due to the popularity of Mr Cuban.

At the age of 12, Cuban began his career as an entrepreneur by selling trash bags door to door. Cuban later opened Motley's Pub in Bloomington while he was studying, reportedly becoming a popular bar in the area.

Apart from running a basketball team, Mr Cuban is in charge of his venture capital and private equity firm, the Mark Cuban Companies, and the Mark Cuban Foundation.

Investments made by Mark Cuban Companies span from companies founded by veterans to those run by minorities or women. His holdings in the blockchain industry are expanding. Health, exercise, wholesome food, and the environment are among Cuban's further business interests.

Potential investors often search for the public debut plans of Mark Cuban-backed companies. Here's a list of companies that remain private and are on the radar of investors:

In April, FiscalNote expressed its intention to go public by merging with Duddell Street Acquisition Corp. (NASDAQ:DSAC). The company aims to list its Class A Common Stock after merging with the special purpose acquisition company (SPAC).

If the transaction closes successfully, FiscalNote will trade under the stock symbol NOTE on New York Stock Exchange (NYSE). However, it would be worth watching how the stock opens amid uncertain market conditions.

The Mark Cuban Cost Plus Drug Company (MCCPDC) provides high-quality medications at the most competitive prices. The company claims that it is transparent about drug costs so that patients pay a reasonable price.

MCCPDC prioritizes its social objective of enhancing public health as a public-benefit organization. Since its inception, the drug company gained the attention of potential investors and often looked for its initial public offering (IPO).

There is no information on Mark Cuban Cost Plus Drug Company IPO plan, and it is highly unlikely that the company will go public this year if it has a public debut plan. 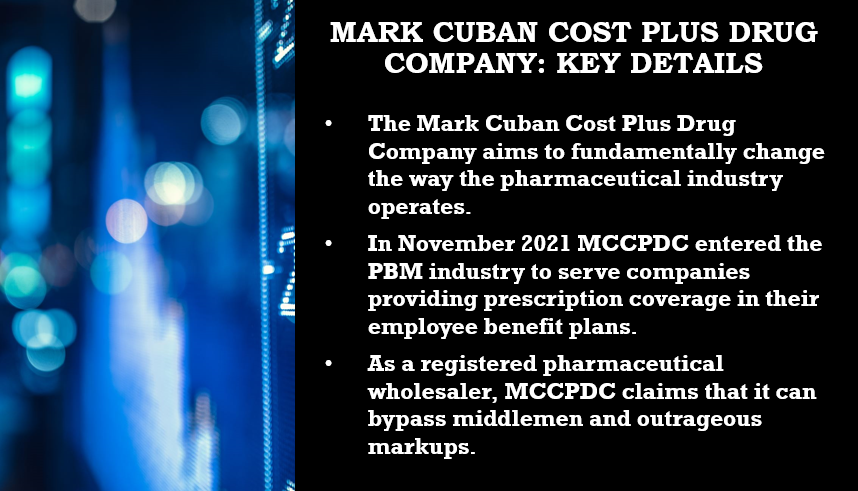 Billshark was established in 2016 by Steven McKean, Brian Keaney, and Michael Mora to save customers’ time and money by lowering their monthly costs and locating dormant memberships.

The company reportedly aims to help consumers and small businesses save US$ 2.7 billion by 2025, and so far, it has saved them over US$ 10 million.

Mark Cuban joined Billshark as an investor and advisor in 2018, and the company continues to gain the attention of stock market enthusiasts. Since 2018, Billshark has collaborated with several financial institutions and fintech firms.

The company has not announced an IPO plan yet and interested investors will have to wait for the official announcement.