Growth stocks are chased by many investors, especially in a low growth world. In this article, we have picked five such stocks from the ASX universe. The companies are providers of technology solutions, consumer products, aftermarket equipment, high-end tyres, and risk management services.

BWX Limited holds a portfolio of personal care brands. The company recently gave a teaser of its FY20 performance and announced capital raising to pursue growth initiatives. A $40 million fully underwritten placement was completed with a share purchase plan being conducted to raise ~$10 million.

Unaudited management estimates indicate that BWX recorded $187.6 million in revenue and $30.9 million in EBITDA (post-AASB 16) for FY20. Its net profit after tax increased by 48% to $14.1 million over the previous year.

Group gross margin reached 58% while net debt position drifted lower to $32 million, excluding leases under AASB 16, compared to $42.8 million in the previous year. Second half performance of BWX was strong across all regions.

Since demand was higher and basket size increased, the company ramped-up operations in its Australian plant, and at its US manufacturing partners. Equity raising would enable the firm to achieve its three-year growth plan. 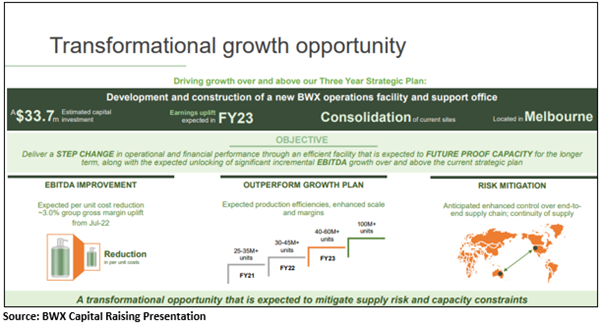 In FY21, the company intends to emphasise on the development of new co-located manufacturing plant and support office, which is expected to become operational by December 2021. The company estimated that the new facility would incur a capital investment of approximately $33.7 million.

The new facility would enhance the existing capability, including scale, volumes, margins, research & development, and supply chain control. Once fully operational, the management believes the investment would unlock EBITDA growth, underpinned by labour productivity, efficiency, cost optimisation, and waste reduction of around 50%.

In FY21, the company expects ongoing growth in revenue and EBITDA of at least 10%.

Infomedia is a software provider to the global automotive aftersales industry. The automotive industry is embracing digitisation for its customers, and technology will play an important role in delivering desired outcomes. 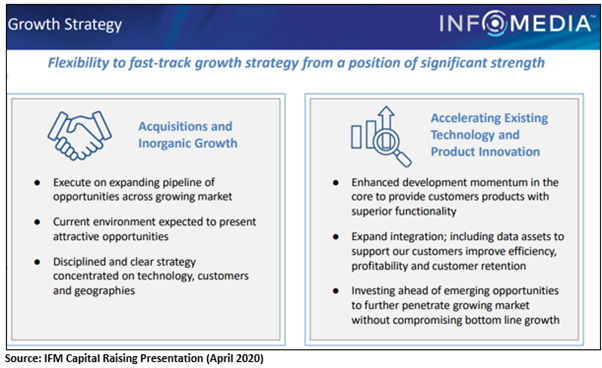 In May, the company completed a capital raising program, raising a total of ~$83.9 million. Infomedia would execute fresh capital on its pipeline of potential acquisition opportunities, seeking additional geographical presence, new customers, capabilities and resources.

IFM further seeks to develop organic parts, as well as invest in innovation, data insights capacity and service. The company also reaffirmed its double-digit growth outlook for revenue and earnings. In FY20, it expects to deliver $93-95 million in revenues and NPAT within $18-19 million.

Carbon Revolution manufactures lightweight carbon fibre wheels used in high street cars. It has recently provided a business update for the quarter ended 30 June 2020. In Q4FY20, the company recorded revenue of $8.1 million, excluding $4.5 million in transit. It sold around 3.4k wheels during the last quarter, up by 82% over the same period last year.

CBR recorded full-year revenue of $38.9 million, up from $23.8 million in FY19. One customer transitioned to sea freight from air to keep buying Caron Revolution wheels.

CBR was also nominated for new business with existing customers where its product would be an option for new programs, which include a three-year contract and six-year contract, having separate per annum volume. The company was also negotiating sale with an Asian OEM.

However, it expects sales to remain impacted due to COVID-19, which has delayed launch of a new program, events, lack of promotional activities, etc. Carbon Revolution has lowered its workforce and optimised shifts.

Carbon Revolution has also dealt with supply chain issues arising due to COVID 19 with elevated logistics cost. Net cash outflow from operating activities for the last quarter was $7.6 million, and it received $5.9 million R&D claim in May.

Cash balance at the end of quarter stood at $33.9 million and the business is funded for its FY21 operational goals.

In May, the company announced that it is taking steps to strengthen the balance sheet and maintain a solid working capital position. PWR Brisbane factory is open and operational for four days a week, and it applied for wage subsidy scheme by the Government.

It was said that C&R Racing in Indianapolis was preparing to resume operations, and some staff was furloughed. The US division received small business support from the US Government, totalling over a million USD.

PWR remains committed to much of its capital expenditure to support growth in new markets like defence, aerospace, and emerging technology. The company also requires further equipment to expand into MicroMatirx cooler production, Additive Manufacturing and Vacuum Brazing.

AVA recently provided an update for Services Division for the fourth quarter of FY20. Services Division strongly performed, and its 4Q revenue was $9.7 million. During the year, the division also saw a three-fold increase in new clients, including central banks, commercial banks, and mining & refining sector players.

Gross margin improved four percentage points to 25% against 21% in FY2019, and the division was EBITDA positive. Management expects revenue and EBITDA growth in FY21, driven by recent acquisitions of new clients and growth.