The stock of gold exploration company, Middle Island Resources Limited (ASX:MDI), marked an uptick of 4.2 per cent on 23rd July 2020 following the release of its robust quarterly results for the period ended 30th June 2020 on the ASX. Can we say, Middle Island has undertaken numerous significant developments during the quarter.

It is worth noting that Middle Island’s activities and operations around its flagship Sandstone gold project remained relatively unscathed by COVID-19 pandemic during the quarter amid its close collaboration with the Sandstone Shire.

Besides, the economic fallout from the coronavirus pandemic continues to bolster underlying gold market fundamentals which, together with the remarkable success of the ongoing drilling campaign, bodes well for the fruition of Middle Island’s Sandstone gold project strategy. 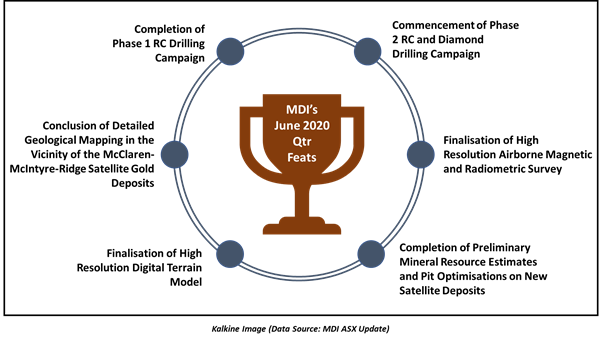 Let us quickly gaze through the significant advancements that defined June 2020 quarter for the Company:

Besides these five deposits, the Company also completed the infill/extension drilling at Two Mile Hill, Wirraminna, Goat Farm, Shillington and Twin Shafts deposits during the quarter.

The continuing Phase 2 RC and diamond drilling is aimed at infilling and extending the five new satellite deposits to an Indicated Resource classification to complement the proposed recommissioning inventory for Sandstone’s fully-permitted on-site gold mill.

The Company has also planned an exploratory RC drilling at the end of the Phase 2 campaign to evaluate a sizeable 1.1km long, undrilled target corridor, described as the Shillington Gap, discovered between the Shillington and Ridge deposits.

Detailed geological mapping was also concluded during the quarter near the McClaren-McIntyre-Ridge satellite gold deposits. The geological mapping, along with high resolution airborne magnetic data and continuing RC and diamond drilling, is expected to support in resolving the complex structural and stratigraphic architecture in this high-grade area.

The preliminary Mineral Resource estimates and pit optimisations were also finalised during the quarter on all new five satellite deposits to aid in planning Phase 2 resource definition RC and diamond drilling.

The Company notified that infill and extension resource definition drilling has been concluded at the existing Two Mile Hill, Goat Farm, Shillington, Wirraminna and Twin Shafts deposits, while updated resource estimates are being completed. Following the receipt and compilation of Phase 2 drilling results, the final resource estimates and pit optimisations will be gradually embarked on the new satellite deposits.

Following the upgrade of the PFS, the Company has rescheduled its FS outcome until late December 2020 quarter amid the success of the 2020 drilling campaign which requires a considerable expansion of initially planned drilling to quantify new satellite discoveries.

Middle Island’s aggregate cash and investments as at 30th June 2020 stood at $5.14 million, including $4.0 million capital raised through an oversubscribed Placement in May 2020. During and subsequent to the June quarter, around 203 million MDI options have been exercised, increasing the Company’s cash balance by a further $1.58 million.

Notably, CY2020 has proved to be a successful one for Middle Island, with the Company increasing the number of shareholders by 235 per cent, market capitalisation by 864 per cent, cash balance by 835 per cent and trading liquidity by 508 per cent.

In addition to these activities, Middle Island expects the formal grant of six of its 10 exploration licence applications comprising the Barkly super-project once coronavirus travel restrictions are lifted or at the Company’s earlier election. The remaining four applications are anticipated to become available for grant in the September quarter.

Subsequent to the grant of applications, the Company’s initial work will focus on: