Melbourne-based IOOF Holdings Ltd (ASX:IFL), a leading provider of quality financial advice, products and services, has released a teaser of its FY20 results and some last quarter numbers.

At the end of Q4, the company had $202.3 billion in Funds Under Management, Advice and Administration. The $200 billion milestone in FUMA has been attributed to the commitment of the company towards larger scale and diversification benefits. The acquisition of the Pensions & Investments (P&I) business also contributed to the business model resilience. IFL believes that the acquisition would play an important role in COVID 19 recovery and long-term growth. 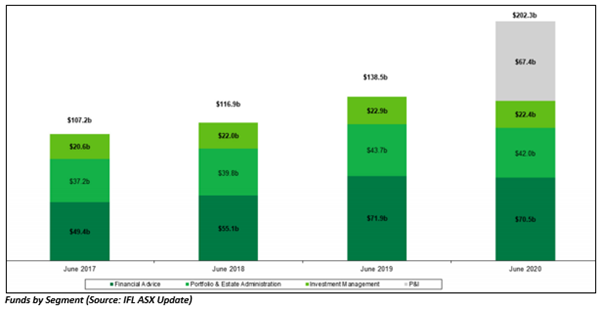 It was acknowledged that the increase of $6.7 billion in FUMA was majorly propelled by the recent recovery in markets, while there were continued flows into the platforms. IFL’s advisors are experiencing client concerns and uncertainties around macro conditions.

Clients had preferred early release of superannuation, and flows to advice were subdued. Management has resolved that no discretionary short-term incentives would be paid to the executive team for the 12-month period ended 30 June 2020.

IFL’s Chairman, as well as CEO, have decided to take a 20% reduction in base pay for six months starting August 2020, while all other directors and CFO would be taking a reduction of 10% in base pay for the same period.

Majority of the amount was paid from the P&I business, totalling $573 million, and the rest paid stood at $170 million. IFL was committed to customer service and ensured that almost (97%) all payments were paid within 5 business days.

Financial Advice: In Q4 ended June 2020, IFM recorded net outflows of $93 million in this segment, primarily driven by off-boarding of two advice practices from the ex-ANZ licensees accounting for $155 million in outflows. Around 12 sub scale practices were also off-boarded, which had $115 million in funds under advice, but this was offset by new on-boarding.

Moreover, the inflows were flat in the segment, primarily impacted by the COVID 19 environment, uncertainty around macro-economic conditions and client concerns.

It was encouraging for the firms as these products were developed in-house using proprietary technology platform, which is enabling Project Evolve21 – a platform transformation project. They continue to add new functionalities to the products.

During the quarter, the company’s MultiSeries, Cash Management Trusts, and MultiMix sector funds experienced net inflows, which were offset by outflow in other investment products. The update highlighted that the strong performance of funds and increasing demand from advisors supported growth.

Pensions & Investments: After the successful acquisition of P&I business, the company remains on-track with integration activities. IFL continues to expect total cost synergies of $68 million (before taxes) per annum along with one-off integration spending of up to $130 million (pre-tax), of which $71 million was incurred. Besides, cost synergies are expected to be realised by FY22.

According to preliminary unaudited management, the company is expecting to deliver underlying net profit after tax (UNPAT) within $128-130 million and UNPAT from continuing operations of $123-125 million.

As per a preliminary review by management, the company’s advice review provision is expected to remain stable at $223 million, including costs. But this provision excluded ex-ANZ Wealth Management Advices Licensees.

Within ex-ANZ Wealth Management Advices Licensees, IFL expects remediation provision would be increased by ~$80 million. This increase is anticipated to come under the financial cap of the remediation program arrangements in ANZ.

The company is scheduled to release further details on its segment financials and key strategic initiatives with FY20 results on 31 August 2020.