Riversgold Limited (ASX: RGL) is an Australia-based company whose operations revolves around the exploration of gold. The Gawler Craton of South Australia and the Tintina Gold Belt in southwest Alaska, USA are some of the important projects of the company.

The Chairman of the company, Mr Rod Webster, said that with the new results from Little gold prospect, the company now has intersected zones of anomalous mineralisation over a 2.5-kilometre-long corridor. The Farr-Jones project demonstrated a potential to host several gold deposits adjacent to the Randall Fault.

As per the company plans, it will continue subsequent drilling at both the Farr-Jones and Cutler projects, where a high-grade drill intersection of 1m @ 62.9g/t gold at the northern end of the Cutler project has not yet been followed up.

In the recent past, RGL in its quarterly report updated a summary of activities for the quarter ending 31 March 2019. The company has a portfolio of highly prospective gold exploration projects in two world-class gold terranes, namely the Eastern Goldfields of Western Australia and the Tintina Gold Province in southwest Alaska, USA. And RGL is also exploring the Olympic Copper-Gold Province in South Australia for a large Iron-Oxide Copper-Gold deposit.

Moreover, the company completed the first aircore drilling program at its 80% owned Farr-Jones Project during the quarter. Significant gold results have been exhibited from several holes, including from the first holes drilled at the new “Eales” and “Little” Targets. 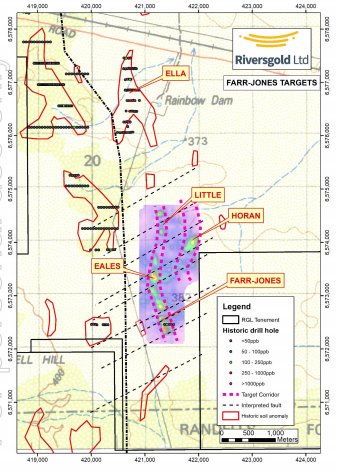 On the cash flow front, the company reported cash outflow from operating activities of ~$0.770 million during the quarter ended 31 March 2019. The cash outflow from financing activities stood at ~$0.017 million for the March quarter 2019. The cash and cash equivalents at the end of the quarter stood at ~$0.348 million as compared to ~$1.135 million in the previous quarter.