The power suspension restriction placed by the Australian Energy Market Operator (AEMO) could soon restore the national energy market following an uptick in energy generation. The AEMO had placed certain restrictions to manage the electricity supply shortage facing the country.

The AEMO had suspended trading on the platform as electricity prices took a sharp turn upwards. Consequently, the wholesale market was locked in an indefinite suspension amidst the ongoing power crisis. It is worth noting that power bills have risen sharply across Australia following a surge in wholesale electricity prices.

Meanwhile, a power crisis has emerged, stemming from global factors such as the Russia-Ukraine war, which has dented the supply chain mechanism worldwide. Besides, surging coal prices have increased the operational costs for generators across Australia, who have passed on these costs to consumers.

Why is AEMO suspending some solar and wind projects?

The AEMO’s answer to this energy crisis was implementing an AU$300 megawatt per hour price cap on the price of wholesale electricity. The AEMO further suspended the electricity spot market amidst an increased usage of electricity during winters and generator breakdowns, which led to a shortfall in supply. Surprisingly, the AEMO has never felt the need to suspend its electricity market until now, as it has been operating smoothly since 1998.

ALSO READ: Preschool fees to be slashed by NSW government

What does AEMO’s latest update say?

On Wednesday, the AEMO released a statement highlighting that a clear improvement has been visible in the market conditions. The AEMO further stated that the market could once again set the price in the national electricity grid from 4 am AEST on Thursday (23 June 2022), taking a staged approach to lifting the market suspension.

DO NOT MISS: How come Canberrans' electricity bills fall while most Aussies' see power bills soaring

According to the AEMO, the suspension helped bring 4,000 MW of electricity generation back from outages. Thus, the market operator decided to move towards the gradual lifting of the suspension. Once market pricing has been restored, the AEMO will monitor the conditions in the National Electricity Market for 24 hours before making a final decision to officially lift the market suspension. 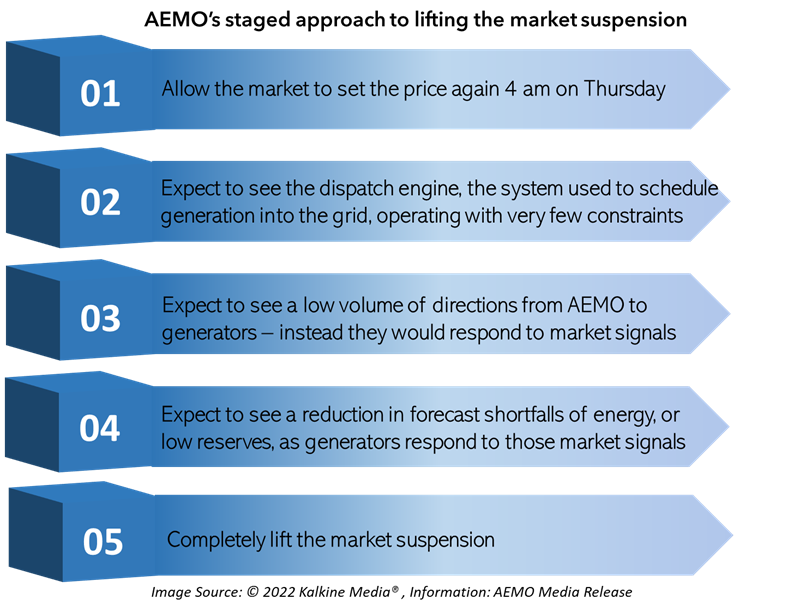 The AEMO expects that the removal of current conditions will help bring the market to the normal bidding and dispatch situation. This would effectively allow the market to move without major interventions from the AEMO and manual management of electricity generation.

Are things improving for the Australian energy sector?

The AEMO’s latest release also stated how the collaborative efforts across federal, state and territory governments had allowed the operator to make this move. Additionally, generators have been asked to bid their plant back into the system. These factors have allowed for greater visibility of generation in a relatively short span of time.

At the same time, a widespread cold snap in Australia could keep the demand for electricity high in the coming months. Power supply is expected to remain strained across five states as many coal-fired power units are going offline. Meanwhile, energy ministers have complained that some generators have exhibited anti-competitive behaviour, threatening blackouts in some states.

What can Australia do to ease the power crisis?

Surprisingly, Australia is one of the world’s largest exporters of coal and liquified natural gas. However, a recent shortage of both has led to a large-scale power crisis emerging in the country. The recent global disruptions have been disproportionately more hurtful for the Australian power market.

Apart from taking the drastic suspension step, the AEMO also urged consumers in New South Wales to temporarily reduce their usage. However, the weather conditions are such that a reduction in demand may not be feasible. Demand has been on the rise even as wholesale prices surpassed the limit set by the AEMO.

However, a deeper examination reveals that the Australian power crisis represents the nation’s sluggish approach to adopting renewable energy. The country has long been criticised for not adopting more sustainable methods in energy generation. The large coal exports are also a major talking point for global climate change activists.

Overall, the electricity crisis may not resolve soon. The suspension of the electricity market has helped increase the generation to a sufficient level. Nevertheless, the AEMO has stated that it would ensure such drastic steps are not needed in the future. As conditions remain dynamic, the AEMO will monitor reserve conditions across all regions.