Private house rentals in the outskirts of London are growing at the fastest pace in 13 years. According to the property portal Zoopla, average rents in the country outside the capital city increased by 5% in the last 12 months to the end of July and added more than £450 to a typical rent bill per year is the biggest ever increase since 2008. Average rents in the country excluding London stood at £790 per month, an increase from the earlier £752 per year. Rents in Mansfield, Nottinghamshire, and Wigan, Greater Manchester, rose by over 10% annually, while East Sussex, Hastings, and Norwich increased by over 9%. 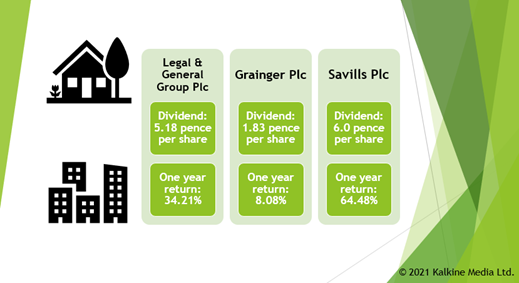 Here we take a look at 3 FTSE listed build-to-rent (BTR) dividend stocks in the UK and explore the investment prospect in them.

For H1 2021, Legal & General announced an interim dividend of 5.18 pence per share to shareholders, an increase of 5% over the previous year’s 4.93 pence per share.

FTSE 250 listed Grainger is one of the leading residential landlords in the UK with 9,109 operational rental homes and 8,851 homes in its £2.1 billion development pipeline. In July 2021, Grainger reached a record lease-up for Gatehouse Apartments, the company’s flagship BTR development based in Southampton. The company plans to deliver a total of 1,000 new homes this year. In June 2021, it acquired ‘The Forge’, a stabilised income-producing BTR asset that includes 283 rental apartments and a commercial unit on the ground floor.

For the half-year ended 31 March 2021, Grainger announced an interim dividend of 1.83 pence per share to shareholders.

Savills is an international provider of real estate services and is a constituent of the FTSE 250 Index. The company is engaged in offering specialised services for letting small to large-scale residential developments.

Savills announced an interim dividend payout of 6.0 pence per share to shareholders for H1 2021.