Investments in stocks are made to get a good return, but sometimes wrong choice or selection can result in big losses. So, it’s better to be informed and pick stocks on a reliable source of information and prudent advice of professionals. Here we are going to discuss, two stocks who in the last three months period were the laggards on the LSE (London Stock Exchange) – InnovaDerma PLC and K3 Capital Group PLC. These two stocks have been reeling in red for all through the said period, providing negative investment return when compared to other similar stocks.

The company announced that it expects to publish its full-year results for the year ended 30th June 2019 on 24th September 2019.

The company provides a trading update for the 12 months ended 30th June 2019. The group’s board announced that the company had traded robustly, and results are in line with anticipations for the full-year results.

In FY2019, the company’s revenue surged by 21 per cent to £13 million against the £10.7m million in FY2018. Profit before tax is anticipated to be in line with prospects, more than doubling against the £0.67 million in FY18. Gross margins significantly increased, with a 500bps increase as compared with the financial year 2018, due to the robust focus on stock and supply chain optimisation. The rise in profit signifies the agility of the business model, which allows scaling the balanced of brands without incurring corresponding surges in overheads.

The company’s all the brands are in well-positioned and delivered both profit and revenue growth in the current period under review.  Skinny Tan in particular contributed sturdily, due to an innovative new product launch with "Protect and Glow" and "Wonder Serum" at premium price points and the significant surge in the retail footprint for the core brand, which is currently available in 2,300 retail stores including Superdrug, Boots, and Asda.

During the period, the company's balance sheet has increased with robust cash generation from retail customers growing stock cover and continued working capital restrictions.  This has led to a better than anticipated cash position in surplus of £1.7 million. 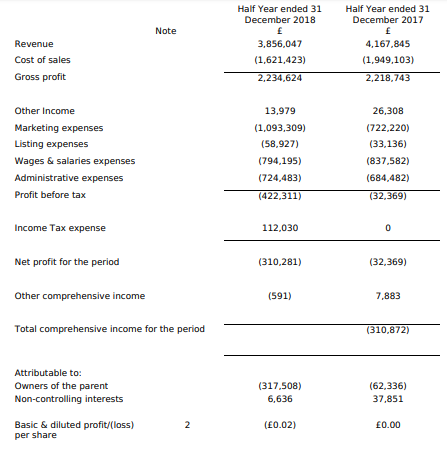 In H1 FY2019, the company’s revenue decreased by 7.48 per cent to £3.9 million as compared with the corresponding period of the last year. The company’s gross margins surged over the period at 58.3 per cent against the previous year (HY2017: 53.3 per cent), supported by a larger retail network and diversity in product offerings. Overall marketing expenditure stood at £1.1 million, a significant rise from the prior period (FY2017: £0.7 million). Substantial investment was made on several social media platforms to drive sales while the change in sales-generating algorithms by providers were altered to the detriment of the supplier. This resulted in higher marketing expense ratio to sales. Identifiable and specific expenditure was incurred on improving the on-line client list, which increased over 10 per cent. In line with the policy of recognising this asset and as in the full year 2018 accounts, the expenditure relating to the growth of the client list was recognised as an intangible asset. This focused investment has driven the growth in DTC activity over the period which is an important platform for upcoming growth.

The company carried a cash balance of £0.7 million at the end of the H1 FY19 as against an opening balance as at the 1st July 2018 of £1.9 million. The company’s funds have been deployed in the on-line marketing spend and continued building of the client list. During the period, the group also acquired an additional 1 per cent of the Skinny Tan subsidiary from the founder. The group anticipates a profitable and cash generative second half of 2019; discussions are already underway with a main financial institution to offer international banking services and financing should funds be required to support incremental progress opportunities.

Haris Chaudhry, the Executive Chairman of the company, said that the company’s full-year 2019 revenue would reflect an increase of around 21 per cent and he also assume profit before tax to be in line with group’s expectations with profit more than doubling from the previous year.  During the year, the company has made outstanding progress and delivered a robust operational and financial performance, which shows the resilience in a challenging retail market and scalable business model.  Going ahead, the company will be emphasising on launching the brands in new territories, product innovation, and entering new categories with new product launches. The combination of which the company believe will additionally accelerate progress during the new financial year 2020.

Daily Chart as on September-17-19, before the market close (Source: Thomson Reuters)

K3 Capital Group PLC (K3C) is a financial service company.  The company offers business brokerage, business transfer, and corporate finance, serving owners around the United Kingdom in the small-cap marketplace. The services offered by the company comprise the presentation of their customers' businesses for sale to market, project management of transactions to completion and the sourcing of potential acquirers. The company’s subsidiaries include KBS Corporate, KBS Corporate Finance, and Knightsbridge.

In FY19, the company’s net assets declined to £7.2 million (FY18: £8.3 million) with current net decreased to £3.1 million (FY18: £4.2m). The group’s board proposed a final dividend per share payment of 4 pence. This results in a total dividend per share of 7.60 pence, a decrease of 33 per cent against the 11.25 pence in FY18. On May 2019, the headcount of the company increased to 165 against the 133 in May 2018, with the further resource being given to all departments in order to retain the high levels of client service and also anticipate delivering to the customers, both new and existing.

The company’s strategy for the financial year 2020 is in line with the earlier declared strategy of progressing to drive organic progress over the volume brands in the group. For Q1 FY20, the company’s subsidiary KBS Corporate Finance’ Transaction Fee income has surpassed the income for the financial year 2019. The company’s ongoing enhancement of proprietary customer matching software has led to substantial improvement in customer volumes of 48 per cent. Relocation of Knightsbridge brand into adjacent office space, delivering higher capacity to expand the Knightsbridge Commercial offering. The company continued investment in development and training. The group continues to look at possible bolt-on acquisitions that the board think would be topping up the whole product basket with a point of view to diversifying the K3 Capital's revenue streams.

Ian Mattioli, Chairman of the company, said that the company had reported a reasonable year of trading and continued progress in the group’s volume brands. The current trading period has seen a substantial rise in these brands. However, the company has seen a considerable decrease in KBS Corporate Finance transactions completing within the current period. Provided the progress of the volume brands, the board had made a substantial move in establishing a stronger business model through a decreased reliance on larger mandates, and also the robust pipelines heading into the new upcoming financial year.

Daily Chart as on September-17-19, before the market close (Source: Thomson Reuters)