ITV Plc (ITV) is a London, the United Kingdom headquartered media company that operates as an integrated producer broadcaster (IPB). The company is engaged mainly in the business of creating and producing original content in the form of feature television shows which are featured on various platforms across the spectrum of the company’s medium like television and digital streaming platforms. The company’s flagship broadcast channel is the ITV, while its other channels are ITV2, ITV3, and ITV4 as well as CITV and ITVBe. The company also provides a high definition (HD) service for all these channels. The company’s content from its channels also gets featured on various frontrunning digital streaming platforms such as Netflix, Amazon Prime as well as the recently launched Apple TV Plus. The company’s own Direct to Consumer service is called the ITV Hub Plus, which it operates through two of its flagship brands called BritBox, which s operated in a partnership with the British Broadcasting Company (BBC) and Cirkus. Geographically, the company has various divisions such as ITV Studios UK, ITV America, ITV Studios Rest of the world and also includes a Global Entertainment network division.

On 12th November 2019, the company presented a Trading statement for the nine months, and the third quarter ended 30th September 2019. It was reported that the company's performance for the nine months ended 30th September 2019 was in line with management’s expectations, despite facing a tough economic as well political environment surrounded by the clouds of Brexit. The company also reported making good progress in the execution of their strategies of improving the content on the digital media platforms. The company has launched BritBox successfully and the management is encouraged by the robust reviews for the service till now. The company also reported having entered distribution and marketing deal with the BT group and EE and in a content association with Channel 4 in the United Kingdom.

The company’s share price, in the last few days, have been on a northbound journey, despite the shares being oversold in the medium term, due to the fears of Brexit. The upswing primarily can be said to be driven by the Networks’ current flagship programme, Love Island’s popularity. Love Island has been a success for ITV, and the unscripted TV drama has produced a created a universal franchise. ITV reports it was the most-watched show on any digital direct medium in 2018 with the best performing arrangement yet with a general viewing of around of 4.0 million watchers and a market share of around 17 per cent. ITV shares had corrected steeply since the Brexit referendum for some though; there is potential for relative improvement in cyclical advertising revenues for the broadcasting business as Brexit uncertainty fades. 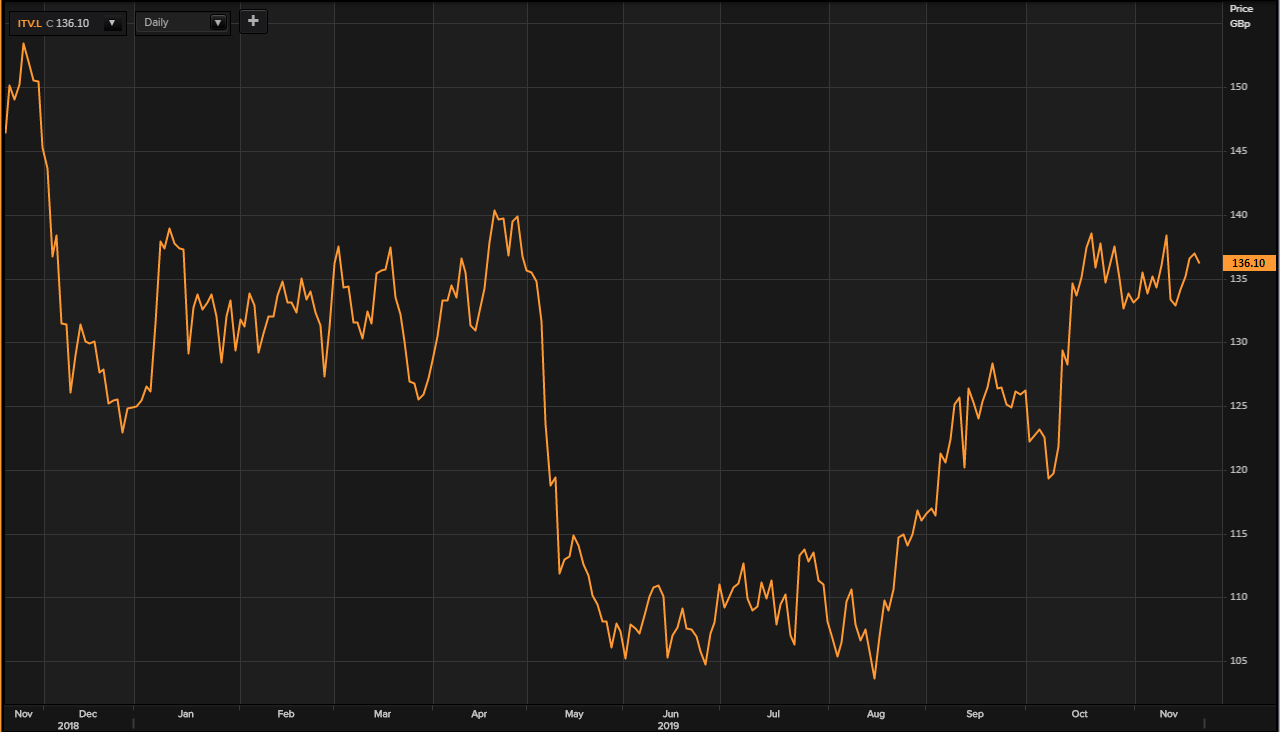 Daily Chart as at 21-November-19, before the market close (Source: Thomson Reuters)

The beta of the ITV Plc’s share was reported to be at 1.0376. This means that the company’s share price movement is almost as volatile in its trend, as compared to the benchmark market index’s movement.