The British American Tobacco company is a Globally renowned tobacco and tobacco produce brand with is reach in more than two hundred Markets around the world. The brand has an unmatched lead in over fifty countries and specializes in producing quality products under multiple categories and brands.

The British American Tobacco company understands the needs of its customers and has been meeting their requirements since 1902. The Company’s commitment towards customer satisfaction can be clearly seen with the company’s constant transformation and evolution of its products. The company’s manufacturing are being continually evolved to focus on a potentially reduced risk product.

The Tobacco and nicotine giant has its footprints spread across 6 continents, thus marking a presence in Asia and Middle East, United States of America, Africa, Europe and Americas. There are around fifty-five industrial unit and workshops for the British American Tobacco Company that are spread across 48 countries around the globe. When it comes to Global diversity, the company is proud of its strength of around fifty-five thousand employees supporting the operations, retail and manufacturing. The members of the organization belong to varied cultures, come from multiple countries, thus bringing in the expertise to understand the need of the hour that differs in every country, city or region.

British American Tobacco Company’s plan continues to be as relevant today as it was when it was first started in 2012 to support their transforming tobacco ambition. Their key aim lies in the delivery of growth while keeping a check on the values along with quality, and at the same time target investments that can help them drive and deliver their ambition to transform.

The core business continues to be highly focused on combustible tobacco end products, but in due course of time and also due to the need of the hour, the company wants to focus on the development and spread of potentially reduced risk products.

The company’s emphasis is very strong on their values, Driving of Growth is their first pillar, improvisation and productivity form their next pillar followed by employee centric approaches to help them build their skills for achieving their ambitions and the fourth pillar keeping their game strong is sustainability.

The last few years have seen a very high focus and light on public health awareness, to be a part of the movement and think for their adult consumers, the British American Tobacco Company has advanced towards bringing in a change with their drastic product innovation. The company aims to positively impact the lives of their consumers around the globe. With the change and evolution in societal attitudes, the tobacco giant has a very clear vision to provide consumers with products that are potentially lower or have a reduced risk.

It is commonly accepted that inhalation of smoke emitted by the combustion of tobacco causes most of the harm associated with cigarettes, and undoubtedly cigarette smoking is the most hazardous way to use or consume tobacco.

One of the strongest steps and efforts made by the company was the acquisition of Reynolds American, that opened a plethora of options for The British American Tobacco Company to drive their ambition to transform. Acquiring the company made them a leading and profound name in the vape industry. This opportunity also opened their gates to experiment and increase size of their tobacco and nicotine range.

Today the company has a variety of products to offer ranging from traditional oral tobacco and nicotine produce, to the latest and most innovated modern oral range along with vape and tobacco heating products. Accelerated growth was seen in our relatively low-risk consumer segment. Though this is just the start, with a customer base in the world of over a billion smokers and nicotine customers, the benefits offered by these transformed and evolved categories are immense.

The British American Tobacco Company's portfolio illustrates its commitment to fulfilling today’s adult smokers' needs while replacing tobacco with a range of products that are  potentially at low risk. It is assumed and believed that a number of smokers which range in millions, will eventually make the choice to move to a range of high-quality, innovative products.

In today's time, the company's cigarette brand portfolio is complemented by a growing range of potentially low-risk products, including

People are aware of the health hazard caused by smoking, however despite the underlying risk, millions around the world opt in for traditional cigarette smoking. Even though the British American Tobacco Company, does not encourage or enhance the cigarette intake, they understand the needs today’s consumers have and that is why the company realizes the requirement for the manufacturing and production of products with extremely high quality standards along with promoting them in a responsible fashion.

It is widely acknowledged that the toxicants in the smoke created by the burning of tobacco are the cause of most of the harm associated with conventional cigarettes. That's why The British American Tobacco Company is committed to designing and selling alternative tobacco and nicotine products that don't burn the tobacco content to provide the consumer with nicotine.

The department of research and development of the organization plays a very vital role in the process. It is led by hundreds of scientists all around the world, their primary aim is to stay focused on their promising pipeline of goods that are potentially at reduced and lower risk. 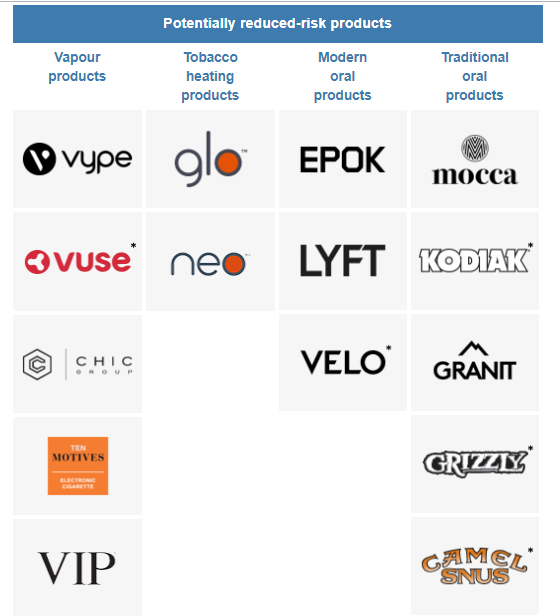