New Zealand happens to be a fast-emerging producer of oil and gas with several under-explored basins as well as substantial petroleum potential. The Government’s long-term strategy is to boost the value of the country’s petroleum exports to $30 billion a year by 2025. This oil and gas company has delivered a return of ~25.66% in the time span of previous 3 months. Notably, in the time frame of past 6 months, the stock rose by ~44.89%.

A major company that will benefit from the growth in New Zealand’s oil and gas sector is New Zealand Oil & Gas Limited (NZX: NZO).

New Zealand Oil & Gas Limited (NZX: NZO) is an NZX-listed company based in Wellington, New Zealand. The company possesses a low-cost structure, cash for the purposes of acquisitions, subsurface expertise, exploration interests in NZ, Australia and Indonesia, as well as a controlling interest in Cue Energy. The company has 3 production profiles i.e. Sampang PSC, Maari and Kupe. The company has stated that production in 2019-20 was down moderately as compared to the previous year. The main cause was month-long maintenance outage at Kupe, as well as a decline in well performance that brought production below plateau. 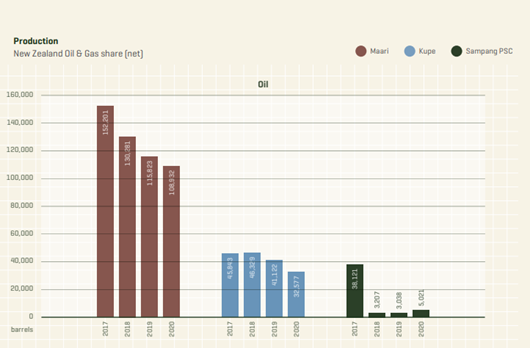 The cash balance is anticipated to reduce moving forward as the company contributes to cost of drilling the Ironbark well off Western Australia, presently anticipated to be drilled in Q4 of calendar year 2020. It was mentioned that pandemic disrupted the global markets, but the company’s production facilities kept operating. The company’s revenues remained robust as the portfolio is dominated by gas, connected to pipeline markets with long term contracts.

In a recent release, it was mentioned that NZO has materially upgraded its developed reserves in Kupe gas and light oil field off Taranaki, New Zealand (NZ). Post a review by joint venture, Kupe fields production adjusted 2P (proven and probable) total reserves have increased by ~23 percent.

Ironbark-1 well is expected to drill to ~5500 meters as well as would be the first test of Ironbark gas prospect.

In the release dated June 4, 2020, it was mentioned that New Zealand Oil & Gas Board undertook strategic review with regards to the future direction of the company.

The impact on energy markets has been intense globally, as the US oil prices recently went negative for first time in the history. The company has weathered this storm considering it has portfolio weighted mainly towards gas and has a robust balance sheet. Recently, it has managed to sign many confidentiality agreements and is keenly assessing opportunities that fit within parameters of the company.

The company has exposure towards foreign currency risk on cash and cash equivalents, oil sales, the recoverable value of oil and gas assets as well as capital commitments that are denominated in foreign currencies. However, the company is also exposed to liquidity risk. Liquidity risk is the company’s ability to meet the contractual obligations. The company keeps on evaluating the liquidity requirements. Generally, the company generates enough cash flows from the operating activities to meet the obligations arising from the financial liabilities as well as has liquid funds so that potential shortfalls can be covered.