This company is the designer, manufacturer and distributor of polymer products and vacuum systems and it has proven its resilience over the past six months. The company is distinguished for providing engineered and innovative solutions for customers in dairy rubberware, water and related infrastructure, roofing, plumbing, automotive, mining and a range of other industrial applications.

In FY 2020, the company reported net profit after tax (NPAT) of $29.1 million, operating cash flow of $48.0 million, and declared a gross dividend pay-out of 13 cents per share.

The operating cash flow of the company was up by 66 per cent, which funded shareholder dividends, capital expenditure, the acquisition of Silclear and a reduction in net debt to $28.5 million at the end of FY20. Considering that net debt is just 10% of the company’s total assets, its balance sheet is in a robust position in order to support continued prudent growth in business. Before the outbreak of COVID-19, the company was on track to achieve another record result. 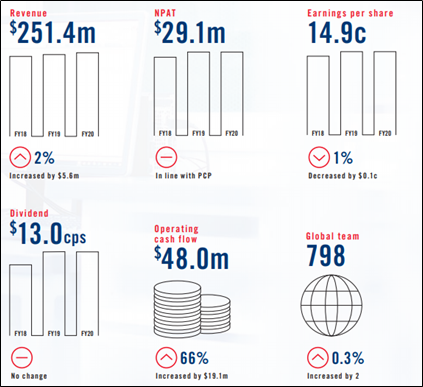 The strength and resilience of Agri business can be witnessed in the record result, delivering Earnings Before Interest and Tax (EBIT) of $25.4 million. It was mentioned that growth in sales of essential dairy rubberware products into the USA as well as strong contribution from Silclear were the primary contributors to excellent FY 2020 result.

Skellerup is the second-largest manufacturer of dairy rubberware in the world. The company’s products are essential to the continued global supply of milk as well as milk products, playing a crucial role in protecting milk quality and animal health. The demand was robust throughout the various lockdown periods and the company’s facilities in New Zealand and the United Kingdom continued to provide food-grade consumable products to customers globally. NZ remains largest market generating 41% of Agri Division revenue from the sales of dairy consumables as well as rubber footwear and despite COVID-19 disruption, the sales were flat on pcp.

The Agri Division result clearly shows the importance of the company’s products to the global dairy industry as well as dairy products the industry delivers to the world. 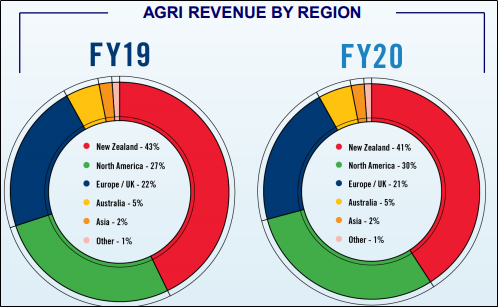 Revenue from this division was steady until the pandemic, which slowed demand in the final quarter of FY20.

Some sales growth was achieved in sporting and leisure, health/medical, electrical and roof sealing applications. The overall impact on the division was neutral, with revenue flat on Y-o-Y basis, in spite of the full year contribution of Nexus. Gross margin was flat and indirect costs increased by 9 per cent due to the acquisition of Nexus.

Silclear Limited, a part of Skellerup Group, has won the popular Queen’s Award for Enterprise - International Trade, the UK’s highest award for business success. The company’s silicone products have an important role in ensuring the safe transportation and collection of milk in dairy installations throughout the world.

Its products are an important consumable for the dairy industry and offer superior durability and strength compared to alternatives. This has generated significant interest from international consumers, with sales overseas increasing by 76% over the three-year application period and the ratio of sales exported rising to 88% of total sales.