The agriculture sector forms a significant part of the New Zealand economy and earns about 50% of the country’s export income. There has been a strong demand for New Zealand’s primary products globally, which has also helped in keeping the economy resilient amid the COVID-19 pandemic.

The sector produces dairy, meat and horticulture products, which also form a part of the country’s exports, making it a desirable choice for investors.

New Zealand’s S&P/NZX 50 Index includes a group of listed firms that are strongly related to the agriculture sector. The index includes firms like A2 milk, Fonterra, Skellerup, Synlait Milk, etc.

Let’s go through the performance of these 4 NZX agriculture stocks. 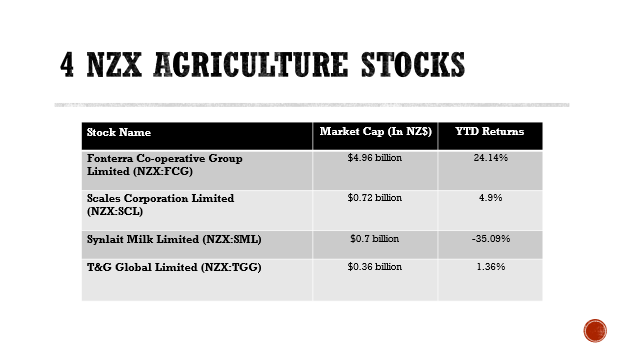 Fonterra is involved with the dairy sector and has some of Australia’s favourite dairy brands under its umbrella.

FCG released its global dairy update for August 2021. The Group reported a record shipment year even after facing supply challenges. FCG posted low milk volumes in NZ and Australia while the monthly production in the US saw an increase.

At the time of writing, FCG shares were trading flat at $3.37 on Thursday.

Scales is a diversified agribusiness company. The Group performed remarkably in H1 of 2021, reporting a 17.5% increase in NPAT to $32.6 million. SCL benefitted from containers obtained by Scales Logistics which helped the business to export their finished products.

Also Read: 5 consumer stocks that have been performing well on NZX

The Group also announced the selection of Sun Qiang as a Non-Executive Director of SCL, in effect from 13 September 2021.

The Group is targeting to help eliminate plastic waste and adding to the better future of Kiwis. The Bottles will be first launched in 2 South Island New World stores and SML will further expand the distribution over time.

T&G Global is involved in growing, packaging and selling fruits and vegetables to consumers worldwide. The Group reported a total revenue of $652.1 million, down 2.9% on pcp and an operating profit of $10.9 million for the 6 months ended 30 June 2021.

DO READ: Which are 5 NZX agriculture stocks with 6-month yield?