The management said that the drop in the revenue was due to investments made in the new facilities and acquisitions done over the last two years.

New Zealand based company, Synlait Milk stated that its earnings before interest, taxes, depreciation, and amortisation (EBITDA) was up 13 per cent to $171.4 million.

Graeme Milne, Synlait Milk’s Chair said in the annual report that looking at it from the perspective of the current situation caused by COVID-19, the Company's financial performance was resilient.

The Company’s FY20 financial result reflected a more robust second-half performance. Its total EBITDA of $171.4 million up 13 per cent and total revenue of $1.3 billion up 27 per cent. Total gross profit stood at $203.7 million, up 9 per cent, but it mentioned NPAT of $75.2 million, which was down 9 per cent mainly due to higher depreciation, and financing costs.

A Glance at Recent Acquisitions

Synlait Milk is a stable and an extremely profitable company with a strong EBITDA growth. The recent results showcased the Company's strength from its core businesses, which is infant formula and lactoferrin.

Last year, Synlait Milk also bought Christchurch-based cheese supplier Dairyworks for $112 million. The Company stated that the price while acquiring Dairyworks indicated 7.5 times of its earnings before interest, tax, depreciation and amortisation across the last 12 months.

Synlait Milk has its 39 per cent stocks owned by China's Bright Dairy. It acquired Dairyworks to increase its market share into everyday dairy products.

Graeme Milne, Synlait Milk’s Chair commented that its NPAT performance lowered mainly due to the investments made in the new facilities and acquisitions. However, the Company was well-positioned to grow earnings off its current asset base, Milne continued further.

GOOD READ: Dairy and Farm: A Glance at Fonterra and Synlait Milk 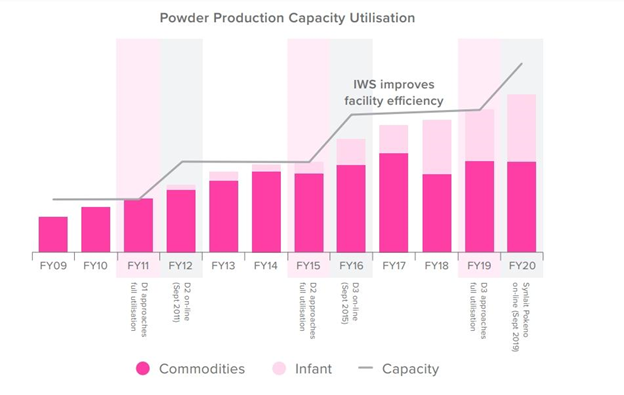 Focus on Growing in Capacity

Synlait Milk’s Chief Executive Officer, Leon Clement said in the media release that the Company was focused on creating a viable, varied, and persistent earnings base. The before mentioned is likely to occur from the increased customer base and multiple sites, markets, and product categories.

Clement said that the Company was achieving the above mentioned by taking such decisions that balanced the requirements of the consumers, planet earth and profit.

The Company had been fulfilling the shifting consumer's demand during the crisis period brought upon by the coronavirus pandemic. Clement mentioned that their strategy was to build a distinct and robust company. For Synlait Milk it was more relevant, mostly because of the uncertainty looming ahead.

On complementing the workforce at Synlait Milk, Clement said that the team had delivered robust results in this unprecedented time.

Balance people and planet with profit

On the outlook front, Synlait Milk projected Dairyworks and Talbot Forest Cheese to deliver revenues of around more than $250 million for FY21 and in the future. The Company believes that it has demonstrated its capability to maintain operational continuity since the past few months.

Especially, when it comes to the demand of the products it manufactures, the Company expects consumer-packaged infant formula product volumes to stay alike year-on-year. It expects less demand in the first half of the next year, 2021 because there will be higher than the average stock in the supply chain.

Therefore, the Company believes in returning to growth in the second- half of the next year after the stocks get over.

Further, Synlait Milk expects solid underlying EBITDA and operating cash flows for FY21. It primarily projected the growth to come from a full year of Dairyworks earnings. While the Company believes that the integration of Talbot Forest Cheese would also deliver growth to Synlait Milk, it also anticipates no interruption to its production or demand for its ingredient and lactoferrin business.

The media release of the Company stated that the FY21 projections were very much contingent on the volatile impacts presented by the COVID-19 crisis. The pandemic has been changing consumer behaviour and impacting channel dynamics. The situation has severely disrupted the supply chain, thus, FY21 guidance is subject to change as per the above-mentioned factors.