S&P/NZX50 Witnessed A Marginal Fall: What Investors Need to Know

S&P/NZX All Consumer Staples fell by 3.16% while S&P/NZX All Industrials ended the session in green as there was a rise of 1.37%. We will now have a look at the performance of individual stocks.

The following image provides a broad overview as to how the share price of VGL has trended in the span of one year: 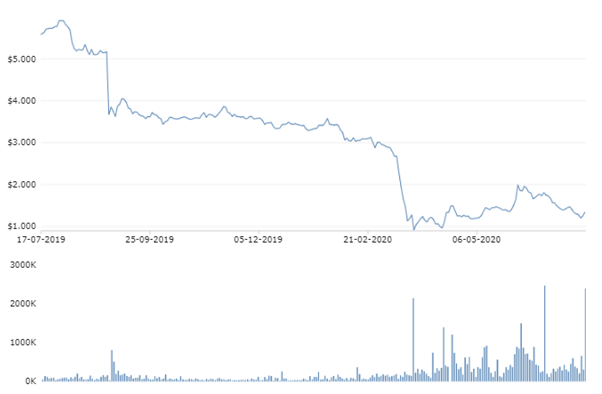 MHJ Ended the Session in Green

Michael Hill International Limited (NZX: MHJ) made an announcement about fourth quarter trading results, along with the business update. The company stated that adjusted same store sales for the quarter were down 4.1%, as compared to the prior year, underpinned by the initiatives gathering momentum throughout business.

The company stated that, for the quarter, online sales were up 193% as compared to prior year, delivering some of the highest weeks in MHJ’s history. In the quarter, numerous digital initiatives were accelerated as well as delivered. For the year, digital channels accounted 4.6% of the total sales.

A Recent Update By DGL

Delegat Group Limited (NZX: DGL) made an announcement that its 30th June 2020 unaudited IFRS reported profit after tax stood at $64.1 Mn, reflecting a rise of 37% on last year of $46.8 Mn. The company stated that it has achieved record case sales of 3,277,000 cases for the year to June 30, 2020, a rise of 9% on the previous year. The company stated that it would be announcing audited full-year results in late August 2020.

The website has been prepared for informational purposes only and is not intended to be used as a complete source of information on any particular company. The above article is NOT a solicitation or recommendation to buy, sell or hold the stock of the company (or companies) under discussion. Kalkine does not in any way endorse or recommend individuals, products or services that may be discussed on this site.
Tags:
S&P/NZX50