S&P/NZX All Materials rose by 4.56% while S&P/NZX All Information Technology ended in red as there was a fall of 1.73%.

The stock price of JPMorgan Global Growth & Income plc (NZX: JPG) rose by 8.06% on an intraday basis to NZ$6.700 per share. Also, the share price of Fisher Paykel Healthcare Corporation Limited (NZX: FPH) encountered a rise of 6.27% to NZ$35.600 per share.

The image given below gives an idea as to how the share price of JPG has trended in the span of 90 days: 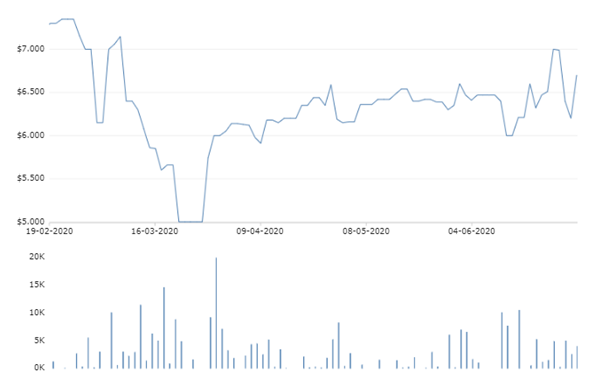 A Recent Update by FBU

Fletcher Building Limited (NZX: FBU) came forward and made an announcement about the intention to make an early repayment of US$300 Mn of USPP notes. The company’s CEO, Ross Taylor, stated that USPP notes, which were issued in 2012 and due to mature in 2022 as well as 2024, were FBU’s most expensive source of debt, with an average cost of funding of 5.4%.

As per the release, the repayment of the notes would result in reducing funding costs by cNZ$17 Mn per year, while still leaving FBU with substantial liquidity of cNZ$1.1 Bn. USPP 2012 notes are having a notional value of US$300 Mn. After considering foreign exchange as well as interest rate derivatives held in respect of these notes, repayment amount is anticipated to be cNZ$350 Mn.

PYS Ended the Session in Green

On May 29, 2020, PaySauce Limited (NZX: PYS) released its annual report for FY 2020. The company’s recurring revenue continues to grow, as a result of an increase in customer numbers as well as ARPU. The company has changed pricing structure to be subscription based and the new pricing better reflects SaaS model. The company’s gross margin improved to 62% for the year to March 31, 2020, up from 51% for the year to March 31, 2019.

The website has been prepared for informational purposes only and is not intended to be used as a complete source of information on any particular company. The above article is NOT a solicitation or recommendation to buy, sell or hold the stock of the company (or companies) under discussion. Kalkine does not in any way endorse or recommend individuals, products or services that may be discussed on this site.
Tags:
market update