NZ Economy and the Reverberating Message

The persistence and size of the economic shock due to coronavirus is incomprehensible. The outbreak of this deadly disease has been impacting several sectors and economies. It can be said that sentiments of market players have also been impacted to a large extent. If global growth comes into question, investors tend to park their funds towards safer asset classes.

The disease is spreading rapidly in dozens of countries. The bottom line is that while there is too much uncertainty to be certain about outcomes, this economic shock could cause lingering pain and perhaps leave deep scars – far larger than the other post-war pandemics.

To combat this pandemic, many countries have initiated lockdown, which has paused large portions of their economies. The lockdown could result in various countries to see a technical recession. This recession is generally stated as 2 consecutive quarters of declining real GDP growth. As per OECD estimates, the lockdown will have an adverse impact of about 20 to 25 percent on output, with the household spending declining by around a third. Many companies of NZ have withdrawn the guidance and they have cancelled dividend, and many are garnering additional capital. In the December quarter, the economy of New Zealand expanded by 0.5%.

The IMF has projected 2020 growth for Australian and New Zealand at -6.7% and -7.2%, respectively due to significant economic disruption from lower commodity prices, social distancing, and lower foreign demand. This decline is much higher than the other parts of Asian countries because of the countries’ dependence on service sector, like tourism and education.

Another reason is the dependence on China. Australia and New Zealand export is heavily focussed and linked to China and China was hit hard in the beginning of the year. So, slowdown already started in these 2 countries before the start of the global slowdown. 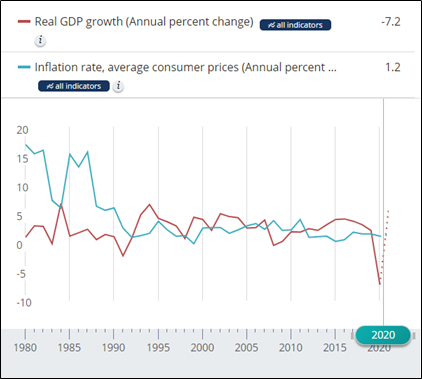 In March quarter 2020, the total number of people who were unemployed were 116,000 and the unemployment rate stood at 4.2 per cent. The underutilisation rate was 10.4 per cent in the quarter ended March. Lately, government paid out $9.6 Bn under its Wage Subsidy Scheme in order to help more than million workers. The amount paid out is equivalent to 3.1% of GDP.

In the near term, unemployment rate of New Zealand is expected to rise substantially.

The CPI rose by 0.8 per cent in March 2020 quarter as compared to December 2019 quarter. The main contributors for the rise were:

Due to the decline in demand for goods and services, accompanied with lower international commodity prices, mainly oil, a downward pressure will be there in inflation. Annual inflation is expected to decline over the rest of 2020. There are anticipations that house prices might decline in the near term. Westpac is of the view that house prices might witness a fall by 7% by 2H of 2020.

For the quarter ended December 2019, the seasonally-adjusted current account deficit (or CAD) amounted to $1.9 Bn as compared to $2.5 Bn deficit in the previous quarter.

For the year ended February 2020, the goods exported stood at $60.5 billion, up by five per cent from the previous year. During the same period, value of goods imported amounted to $63.7 Bn, reflecting a merchandise trade deficit of $3.3 Bn.

The country’s terms of trade is expected to be supported by lower international oil prices. Also, it is important to note that food product exports are a crucial component of the merchandise exports. This would be supporting the demand of export. On the other hand, services exports would be substantially impacted because of the collapse in international tourist numbers in the near term.

Recently, Westpac released a report in which it estimated, for each Alert Level, the likely impact on activity in 103 industries across the whole economy, generating a rough estimation of the total economic impact. As per the report, at Alert Level 3, the GDP is projected to decrease by 8% and, at Alert Level 2, economic activity is expected to decline by about 4% as compared to normal.

The effect of Covid-19 on GDP will depend on which Alert Level the country is in, and for how long.