As per the report dated April 5, 2020 released by WHO, New Zealand has a total of 872 confirmed cases of coronavirus. Because of the outbreak of the coronavirus, the New Zealand government has urged its citizens to certain specific preventive measures to control the spread of the deadly disease. People are advised not to travel overseas at this point. The NZ government had raised Alert Level 4 on 2nd April 2020 and declared National state of emergency and encouraged people to stay at home. The government revised the information on border closing as well as an extension for visa holders. 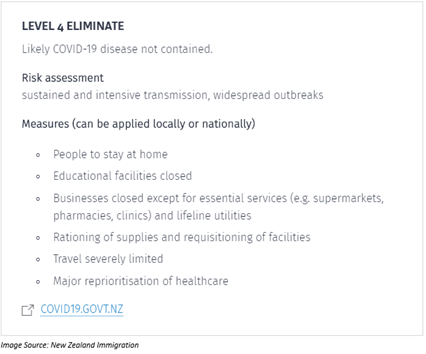 Most of the sectors have been impacted by the outbreak of COVID-19, especially travel and tourism, after the restrictions on overseas travel.

The government has imposed restrictions on travelling to New Zealand. There are exceptions to the closure of border that can be made possible through Immigration New Zealand for special cases.

Any individual who enters the country is asked to isolate himself/herself for a period of 14 days upon arrival. In this article, we would be discussing the companies which are listed on NZX and see the effect of COVID-19 on their business operations.

On 31st March 2020, Turners Automotive Group (NZX: TRA) released an announcement where it highlighted that the company expects its net profit before for FY2020 to be within earlier stated guidance of NZ$28 million to NZ$30 million. Before the emergence of COVID-19, the Group expected to report at upper end of the previous market guidance.

The CEO of Turners Automotive Group confirmed that the company is well-placed. It was also mentioned that the initial priority would be to support staff, customers, suppliers, and other stakeholders due to the lockdown situation.

According to the release, the leadership is preparing for various future situations which includes possibility of an extended lockdown & prolonged slowdown. It is also giving attention to the cost base.

The company expects an adverse impact in 1H FY2021. At this point, it feels that it is too early to quantify the impact. The Board has deferred its Q3 dividend as the precautionary measure which was generally paid around April end.

The group continues to function well within bank covenants. It confirmed the extension of its securitisation warehouse facility with BNZ to NZ$250 million and has unrestricted cash of more than $20 million along with additional funding headroom in case of requirement.

The company derive benefits from its diversified business. TRA’s three businesses out of four have been confirmed as “Essential Services” under financial institutions classification. They are largely operating remotely.

The company is also working with the landlords to lessen rent payments over the lockdown period. Moreover, the release stated that Government stimulus programs would also make a significant difference.

The businesses of Freightways Limited (NZX: FRE) have been classified either as essential services or suppliers to an essential service. Its Information Management businesses assist hospitals and government departments. The company’s networks are open for business for medical and pharma markets along with the movement of perishable food stuff & home delivery of grocery items.

On 1st April 2020, the company provided its trading update and completed the acquisition of Big Chill Distribution Limited (Big Chill). Let’s look at each update separately.

Before the Level 4 Lockdown, in the month of March 2020, the company witnessed strong trading. The company noted that there was a 65 percent drop in hub & spoke EP volumes in the initial couple of days of the lockdown. The company is anticipating that its dedicated networks would remain at constant levels and home delivery of food might increase. However, it expects business mail volumes might decline.

The company stated that it can reduce its direct cost structure to show the decreased volumes & has taken a crucial step on this front, including accessing the Government subsidies.

The company feels that it is too early for them to forecast the impact on the full year results because of the changing definitions of essential services, affecting the ability of the customers to function.

Wrapping up of Big Chill Acquisition: