In what will take the brand reach of Rritual Superfoods Inc (RSF:CSE) to a completely new level, the Company’s product line and the CEO would be featured in a live shoot at New York’s The Mung Bean Natural Foods and Vitamin Store. The event would be conducted by ‘New to the Street’ and would act as a vendor showcase for Rritual. It will also be distributed widely to outlets including Bloomberg, NEWSMAX, and FOX and is expected to reach nearly 540 million homes in the US and across the globe.

Significant opportunity for RSF to showcase its product range

The Mung Bean Natural Foods and Vitamin Store is a prominent health food retailer in New York. The event would act as a vendor showcase among the independent health food and vitamin stores throughout the fall season across New York, Connecticut, and New Jersey. 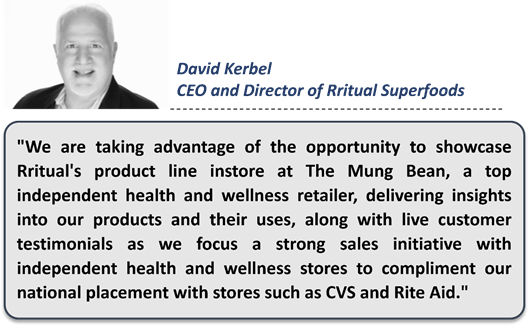 ‘New to the Street’ would also create a segment that will be distributed for broadcasting on Television to Bloomberg, FOX Business, Fox Broadcasting, and NEWSMAX, among others.

‘New to the Street’ FMW Media in a nutshell

Rritual Superfoods continues to rev up its strategy to expand the reach of its natural superfood products. An in-depth profiling of Rritual and its products at the “New to the Street” show would significantly enhance Rritual’s brand awareness and visibility.