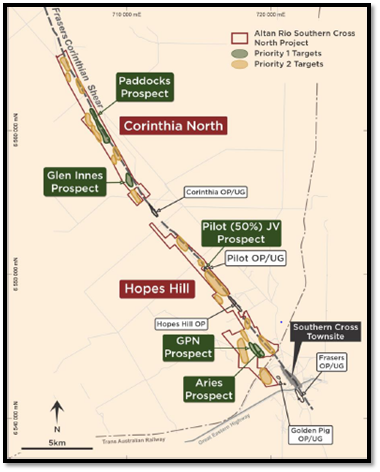 Altan Rio has planned extensive exploration programs to delineate mineralisation potential on the prospects. The Company owns 80% of Aries, GPN, Glen Innes and Paddock in joint venture with Surveyor Resources Pty Ltd. For the Pilot deposit, Altan is in 50-50 JV with Barto Gold. Two diamond drill holes are planned on the Aries prospect with the program will be co-funded by the Western Australian Government under its EIS scheme.

Altan Rio entered a 50-50 JV mining agreement with Barto Gold for exploration and development activities at its Pilot deposit in June 2020. Barto Gold owns and operates the Marvel Loch milling facility located at an economic trucking distance of 40km from Pilot. The presence of an operational milling facility in close vicinity to the project provides an opportunity for early commercial production once the decision of mining at Pilot is made.

The historical data suggest that Pilot had produced 54,554 ounces of gold in the past from its open pit mine. The mining reached a depth of 65m in open pit while the historical drilling has revealed the mineralisation up to a depth of 150m. Thus, the Pilot deposit exhibits potential for open pit and underground mining operations.

Also read: Pilot proving its gold worth to Altan Rio

The company recently undertook a 10-hole RC drilling campaign at Pilot. The drill program was intended to test mineralisation along the strike of the pit and at depth below the pit for extensions to mineralisation. The assay result confirmed the extension of high-grade mineralisation up to depth of 60m beneath the level of historical workings. 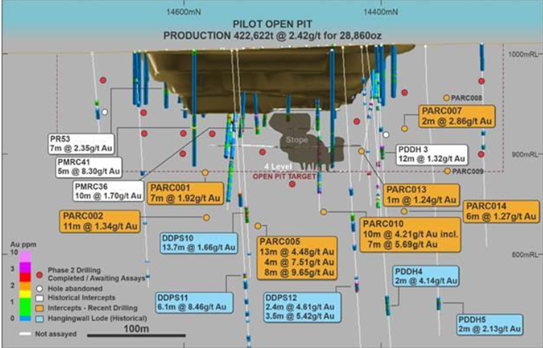 Following the assay results, Altan Rio conducted a downhole EM survey in hole PARC005. The EM survey indicated a strike extent of gold mineralisation that was initially estimated from historical geophysical data. Based on the consultants' recommendations, Altan will drill test at a position down dip from the intersection of PARC005.

A more conclusive picture of Pilot deposit can be drawn with more drillholes on the deposit and surface EM survey planned. The deposit has the potential to generate cash in near term and could help fund the further exploration activities on other identified high priority targets.

The company holds a strong land position in a premier gold district of Southern Cross. The project has near term cash flow potential. The JV with Barto Gold provides a unique opportunity for a rapid transition into the production phase with an operation milling facility in close vicinity of the project. The cash flow from the Pilot deposit could be utilised to accelerate the exploration on other identified priority targets.