BBD.B, BCE and CNQ: Why are these TSX stocks trending hot?

Notably, all these three TSX players, which appear to have relatively outperformed the TSX 300 Composite Index in the last year, announced their quarterly results for Q1 FY2022. on Thursday

So, let us discuss their quarterly performance in Q1 2022 and find out if these TSX stocks are suitable investment options.

Canadian aircraft company Bombardier Inc registered a year-over-year (YoY) decline in its revenue to US$ 1.24 billion in the first three months of Q1 FY2022. The aerospace company saw its adjusted EBITDA rise to US$ 167 million in the latest quarter compared to US$ 123 million in Q1 2021.

Bombardier zoomed by over 39 per cent YoY and slipped by nearly six per cent to C$ 1.245 per share at 10:43 AM EST on May 3. The aircraft stock had a Relative Strength Index (RSI) value of 38.16 this day, according to Refinitiv.

On the financial front, the cable operator recorded a YoY surge of 2.5 per cent in its operating revenue to C$ 5.85 billion in the first quarter of FY2022. Notably, the internet service company saw its net profit at C$ 934 million in Q1 FY2022, a YoY spike of 36 per cent. However, its FCF plunged 23.1 per cent YoY to C$ 723 million in the latest quarter.

Canadian Natural Resources reported a net income of C$ 3.1 billion in the first three months of fiscal 2022, an increase from C$ 1.37 billion earned in Q1 2021. The energy company increased its adjusted funds flow to about C$ 5 billion in the latest quarter, representing a YoY growth of C$ 2.3 billion. 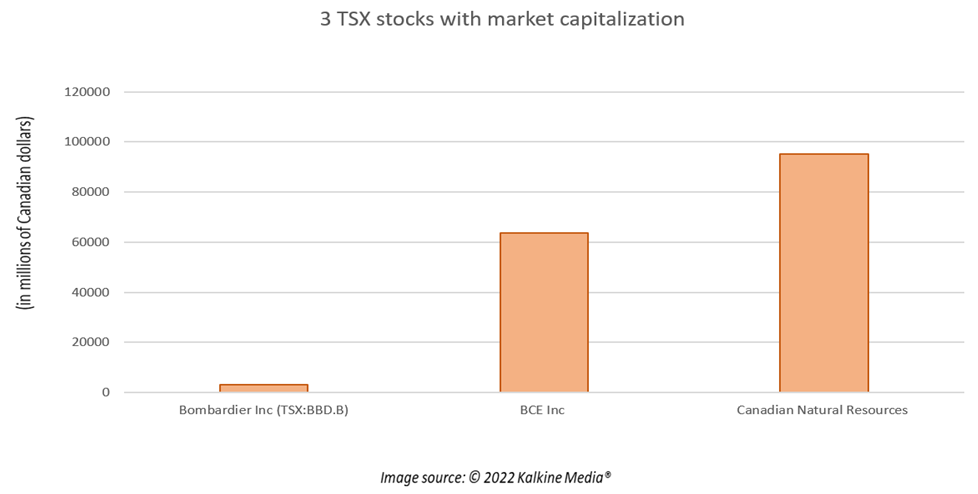 BCE Inc and Canadian Natural Resources are large-cap stocks and pay dividends, which could fetch passive income to investors. On the other hand, Bombardier Inc is a mid-cap stock that could widen one's exposure to the aerospace and defence industry.