The COVID-19 pandemic has brought about a change in business environment, with the evolving demand for digitisation, as well as cloud services primarily due to the fact that numerous entities are exploring ways to keep themselves functional and dynamic in times of shutdown and embrace new ways of remote working.

Furthermore, as numerous firms are noting a shift towards digitalisation, the method in which day to day functioning of the businesses is managed falls under amplified surveillance.

Technology in the form of data centres is coming at the front foot to aid companies to adapt to the burgeoning pace of digital disruption, cloud services that rely on the factor of lower latency connectivity.

In the current times, Data centres have become essential for the continuity of any business as they possess networking, data backup and recovery. Hence, data centres reliability and security are among the top priority of any firm.

In this article, we would be having a look at ASX 100 listed data centre-as-a-service provider, NEXTDC Limited (ASX:NXT) from the technology sector that has outperformed and emerged stronger on ASX technology space with its impressive performance amid COVID-19 trigged headwinds.

Interestingly, NEXTDC share price has been climbing up on ASX and has generated an awe-inspiring return of 38% over the last six months and 644.67% since its listing on ASX in December 2010.

Also, the astounding 3-month return of NEXTDC shares by 20.92% is buoyed by the positive business updates during the last couple of months, demonstrating growth trajectory, soared earnings multiples amid the COVID-19 crisis.

Revenue was noted to be towards the upper end of the guidance range of AU$200 - AU$206 million.

Additionally, the Company’s operating cash flow noted a considerable increment of 37 per cent (y-o-y) and was noted at AU$53.9 million. NEXTDC also witnessed an increment in its capital expenditure by 11 per cent and reached AU$418 million.

It is worth noting that the Company successfully raised AU$862 million via an institutional placement of AU$672 million and AU$190 million Share Purchase Plan in April 2020 and May 2020, respectively.

The proceeds from the capital raising aided NEXTDC for maintaining its momentum in pursuing growth opportunities, and fund Phase 1 commencement of the proposed expansion of a new data centre in Sydney (S3).

Furthermore, the Company also divulged its bolstered financial position with AU$893 million in cash and cash equivalents, as on 30 June 2020 versus AU$399 million noted in FY19, demonstrating the fact that the Company is well capitalised for growth.

NEXTDC witnessed accelerated customer growth of 15 per cent y-o-y and stood at 1,364. Moreover, interconnections noted an upsurge of 19 per cent and were recorded at 13,051, representing 8.1% of the recurring revenue. 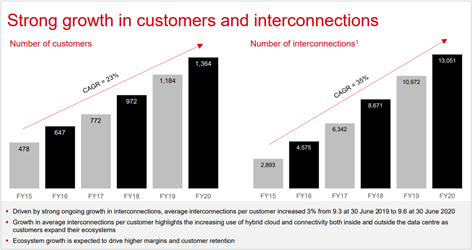 NEXTDC’s contracted utilisation enlarged by 33 per cent and reached 70.0MW, with new sales of 17.8MW, before adjustment for a one-off clawback of 0.4MW wholesale capacity. 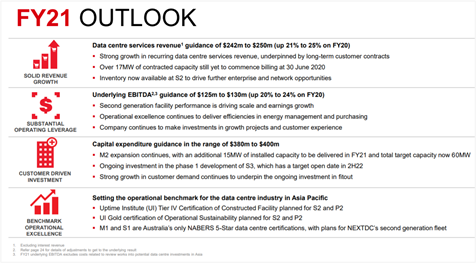 NEXTDC provided the earnings guidance for FY21 and projected the following-