The Company holds 100 per cent ownership in two huge permits, ATP1194PA and ATP 927P, in Queensland. Besides, it has an equal joint venture (JV) with Strata X Energy Limited (ASX:SXA) to develop the ATP2051 permit as a Coal Seam Gas (CSG) project. The project stretches over an area of 154 square kilometres in the Surat Basin.

Through the financial year 2020 (FY20), Real Energy was actively involved in gas exploration, evaluation, and development of its wholly owned permits (ATP927 and ATP1194PA) and 50 per cent owned ATP2051P. The Company also advanced on its hydrogen initiatives. 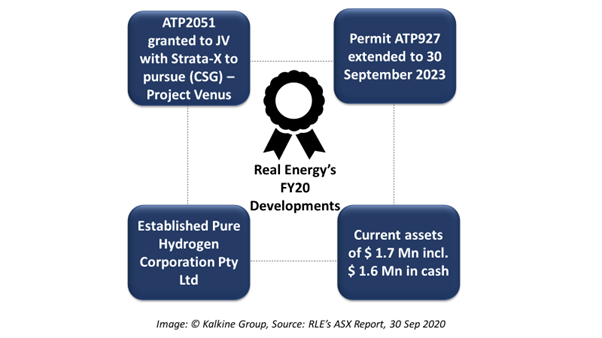 Covering 154km², the ATP2051 acreage was granted to the joint venture between the Company and Strata-X to pursue CSG– Project Venus. Besides, independent assessment by MHA Petroleum Consultants of Project Venus offered the best estimate for Prospective Gas Resources of 694 PJ.

The highly prospective Walloon CSG area is encircled by key CSG-producing assets. This allows the joint venture to accelerate the progressive conversion of gas resources to gas reserves, with the ultimate goal being ramping up the development for potential cash inflows.

The JV has been undertaking the initiative to begin operations on Project Venus. Drilling of Venus 1 well is scheduled for next month, in October 2020.

Permit ATP927 has been extended to 30 September 2023. This enables RLE to advance its endeavours concerning the Windorah Gas Project’s exploration and development.

Hydrogen is a high-energy fuel that can be burned with no CO2 emissions. Industry experts opine that the hydrogen industry may grow rapidly, catalysed by credible hydrogen usage in the transport and power industries. So much so, Australia’s Federal Government remains committed to developing this industry.

The Company’s focus is likely to remain on expanding the business through organic growth. Real Energy seems to be on the right trajectory, as developments have continued subsequent to the quarter, the most significant being the SIA with Strata-X Energy to merge the companies to Pure Energy.

In July 2020, Real Energy and Strata-X Energy announced that they intend to merge and form Pure Energy. Post the merger, the Company will own 100 per cent of Project Venus. 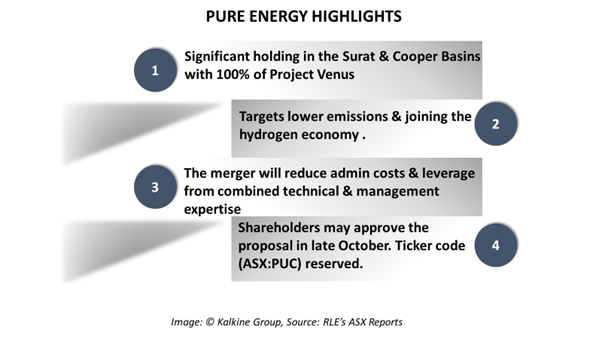 After reservoir enhancement, Venus-1 is likely to be set up as the first CSG pilot well for long term testing purposes. The target would be on commercial gas flows that may facilitate predictable conversion of the prospective 694 PJ gas resources in ATP2051 into reserves. This indicates a good potential for early cash inflows.

Subsequent to the reporting period, the Company met another milestone, besides the SIA with Strata-X. On 21 September 2020, Real Energy raised $800,000 via a share placement. Funds will support the drilling and testing of Venus-1, together with working capital.