Since its establishment in 2018, the Company has strengthened foothold across its gold & base metal projects in premium mining neighbourhoods. With strong interest in the Western Australian gold projects, the Company in November 2020 acquired the advanced Mt Dimer (mining lease) and Yarbu Projects. Additionally, it acquired the Trident prospect, near Broken Hill in New South Wales.

It lies within the southern extent of the Archaean Diemals-Marda Greenstone Belt of the Yilgarn Block in Western Australia. The tenement hosts the historical mining centre, which produced ~8,500 ounces of gold. The open pit was mined to a depth of 50m, extracting 77,000 tonnes of ore at a grade of 3.44 g/t gold. 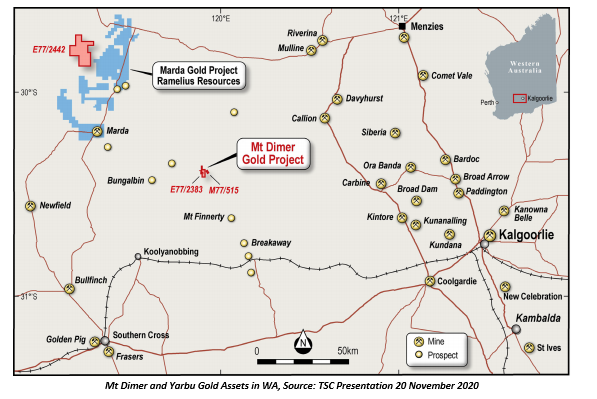 Over the past three decades, the eastern goldfields have attracted more dollars within WA, while the central Yilgarn remained largely overlooked. Even the shallow gold mineralisation has not been systematically explored, thus enhancing the opportunity in deeper sections.

A review of historical drilling and open-cut pit has outlined potential for a south plunging gold shoot continuing beneath the base of the pit. The potential shoot in the north-south long section indicates that the gold mineralisation plunges below the current pit and remains open at depth.

The Marda Gold Project holds a JORC 2012 mineral resource of 280,000 ounces across nine deposits. The Clampton Fault is a regional geological structure, running through the western side and is associated to the Clampton Mine, which produced 7,800oz gold (9,534t @ 25.4g/t Au) during 1933-50. The Andromeda Gold Prospect, ~1km from the Yarbu tenement, intercepted gold mineralisation, including 16m with 1.1g/t gold and 7m with 2.4 g/t gold. 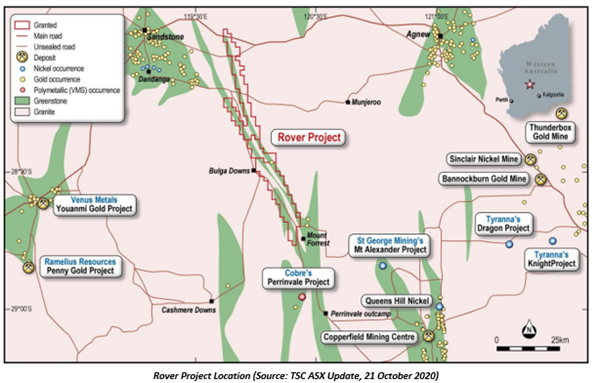 The project is stationed in the matured mining neighbourhood with existing supportive mining infrastructure. The Sandstone greenstone belt is an established mining zone with historical production of nearly 1.3 million ounces of gold. The Rover Project may further benefit from the presence of established gold beneficiation plants that may resume operations within the region in the future.

The 33-drill-hole campaign was designed to follow up the previous significant results. It focused on testing new gold prospects at the project, following on from the recently concluded auger drilling program and geochemical studies.